Kim Kardashian and Kanye West Welcome Baby No. 3 via Surrogacy! Fans Set Theory That Kylie Jenner Might Be The Baby's Surrogate Mother 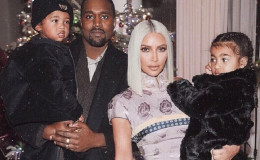 Kim Kardashian Finally A Mother of Three. Kim and Kanye West Welcome via Surrogacy and Fans Set Theory That Kylie Jenner Might Be The Baby's Surrogate Mother. Kylie Jenner was even rumored to be in labor and rushed to hospital last weekend but the rumors have now been confirmed to be false!

Another baby makes them a family of five!!

Keep reading for all the details.

Kim Kardashian and Kanye West Welcome Baby No. 3 via Surrogacy! Fans Set Theory That Kylie Jenner Might Be The Baby's Surrogate Mother

Kim Kardashian is finally a proud mother of three!

The 37-year-old mother to be shared the big news on her official website and following the day, she tweeted a photo of herself walking down the street and captioned the photo with "#momofthree.

In her official blog, she wrote a heartfelt message, declaring that she and Kanye have welcomed their dream baby.

She started off by writing,

"Kanye and I are happy to announce the arrival of our healthy, beautiful baby girl. We are incredibly grateful to our surrogate who made our dreams come true with the greatest gift one could give and to our wonderful doctors and nurses for their special care. North and Saint are especially thrilled to welcome their baby sister."

The pair welcomed the happy, healthy baby girl on Monday morning, January 15, 2018, at 12:47 a.m.weighing 7lbs and 6 oz. Also, she shared a couple of photos on her Instagram stories, one story where she wrote, "She's Here!" 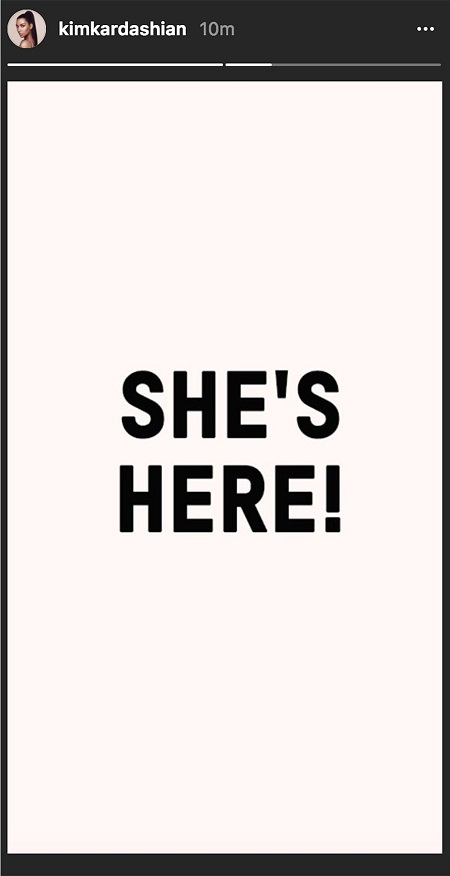 In another story, she posted a photo of a pink flowery cake given to her new baby and wrote, "Thank You mom." 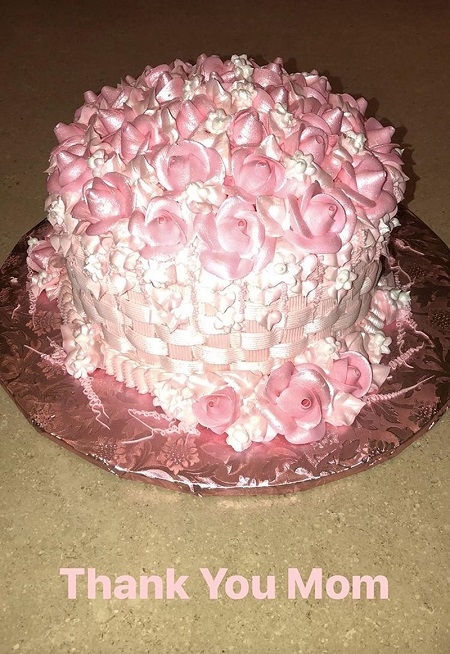 Kim and Kanye already share two children, daughter North West, who's 4 and half years and 2-year-old Saint West. The happy couple got married back in May 2014 in a lavish ceremony in Florence, Italy after seven months of being engaged.

In June 2017, the pair revealed that they decided to have the third baby via surrogacy and have already hired the surrogate. The details about the surrogate mother are yet to be revealed but most fans speculate that Kylie Jenner who's also been rumored to be pregnant is the surrogate of Kim.

Last Friday, a rumor that Kylie is "in labor" and "rushed to hospital"surfaced on the web and most fans quickly set up a theory that she's the one who's the surrogate of her sister Kim's baby. 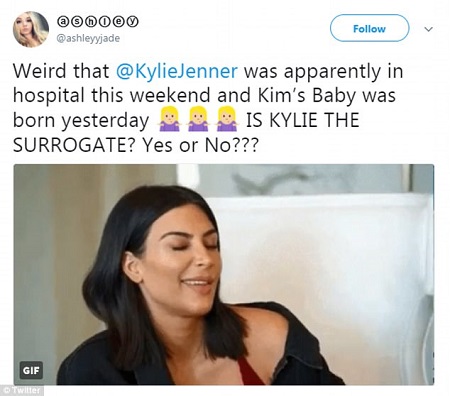 Not only this, Kylie too posted a picture of herself holding the baby in one of her stories that convinced many fans that she was the one carrying Kim and Kanye's baby the whole time. Well, it's about time this theory proves out to be a reality but we're guessing it's just false alarms.

TMZ confirmed the rumors to be false and Kylie was not in labor so, it finally explains everything. All in all, big congratulations to the entire Kardashian family!!