Love Is In The Air; Chris Martin And Dakota Johnson Rocks Matching Tattoos 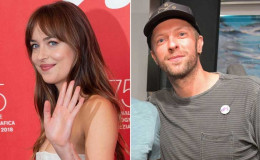 Chris Martin and Dakota Johnson have been in the news for over the past few months; The duo is Dating for around 7 months now and recently they etched matching tattoos in their arms; Also, see..

Putting the name on it, it seems!

Actress Dakota Johnson was spotted rocking an infinity tattoo while she was attending the Venice Film Festival on Tuesday, September 4. At first many of us thought, it must be just a random tattoo.

But looks like it isn't! Coldplay frontman Chris Martin was spotted rocking the same tattoo last month on August. 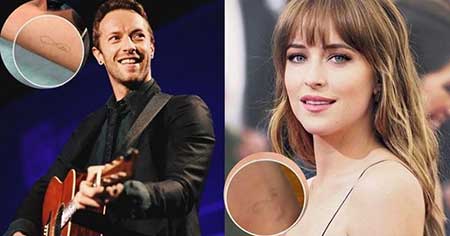 For the past few months, both Fifty Shades actress and "Fix You" singer has been giving their fans all sorts of relationship goals. When the duo confirmed their relationship eight months ago, it was one of the most shocking news.

There's a comprehensible age difference between the two but one of the sources close to Chris said,

“Chris is very young at heart so it makes sense for him to be with someone younger.”

Naturally, many people also had questions whether this is just a small time fling between the two for which the source further added,

“That’s just one of the ways Dakota is very much his type.”

Last year on December, the duo went on an exotic vacation in places like Israel and Malibu and there we could see them packing in all sorts of PDA.

The duo looks made for each other and we sure hope this turns out be more than just a relationship for the couple. Chris was previously married to actress Gwyneth Paltrow from 2003 to 2016.

The couple is a parent to two children, Apple, and Moses Martin.