Mackenzie Standifer, who is famous for her role in the series, 'Teen Mom OG' renewed her wedding vows once again with her husband, Ryan Edwards.

The pair who got married earlier this year on May, gave an extravagant party while both of them renewed their wedding vows in front of their friends and family.

Let's take a closer look at the ceremony went down and know everything in detail here.

We all have seen countless celebrity couples who renewed their wedding vows after a certain amount of time in order to prove the bond between them remains the same after all this time. 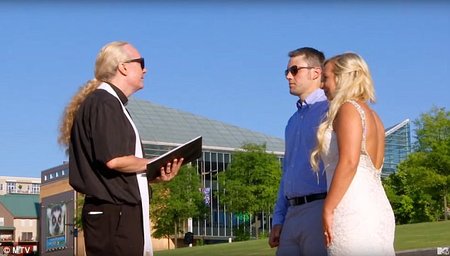 But it seems Mackenzie and Ryan married once again because after they tied the knot earlier this year, Ryan went straight to rehab and they didn't have time to celebrate the ceremony.

It was officiated by their good friend and no one but the couple was there while the ceremony was going. So it's only natural the pair also wanted to enjoy their wedding just like every other person does.

The news of their second nuptials was broken by the E! network. According to the tabloid, there were around dozens of the couple's friends in the attendance.

Upon renewing vows with her husband, the bride stated,

“It’s been in the works since the day we got engaged. It was never just decided upon — we knew from day one this was going to be it.”

Well, we had already envisioned the pair definitely planned for their wedding even before they got married earlier this year.

The nuptials took place in a warehouse which was converted into a big space. Many of the guests were not able to make it the ceremony and the most notable of them all was Ryan's ex-fiance Maci Bookout, who didn't show up at the party along with their 9-year-old son, Bentley.

The pair tied the knot earlier this year in May.
Source: In Touch Weekly

Mackenzie is also a mother of a boy named Hudson from her previous relationship with Zachary Stephens. The pair is very happy now and we wish they stay like this forever.

For all the latest gossip from the celeb world, make sure to follow Marriedwiki.com/article!!!