Home Article Actor Mickey Rourke, 64, is living a controversial personal life. Know about his failed marriages and past affairs

Actor Mickey Rourke, 64, is living a controversial personal life. Know about his failed marriages and past affairs 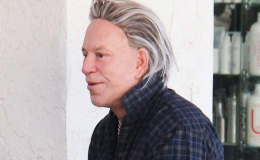 Philip Andre Rourke, popular by his nickname Mickey Rourke is one of the famous American actors and a former boxing champion.

He is one of the successful actors in the industry. Although he's rarely seen in the movies nowadays, he has made a mark in the film industry and let's not forget to mention that he's a boxing legend.

Although his professional career has climbed sky high success, his personal life, however, has been an unstable one.

With two failed marriages and incomplete love stories hanging in his past, we could definitely learn a lot from his personal life.

Let's dive in to know everything about him in today's section.

The award-winning actor and hit movie, "Diner" star. Mickey Rourke has a long list of girlfriends and partners, and surprisingly wives too. 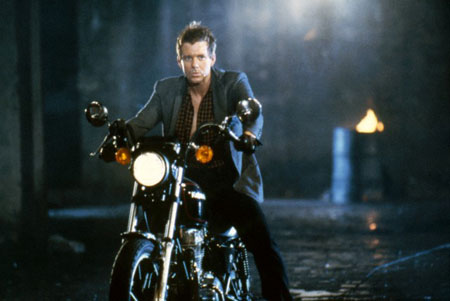 1983, Oklahoma — Mickey Rourke on the set of “Rumble Fish.”
Source: The Selvedge Yard

Mickey Rourke was married twice, once back in 1981 with his movie Hardcase co-star, Debra Feuer. The two met on the sets of the movie and later also featured in 1988 movie Homeboy. 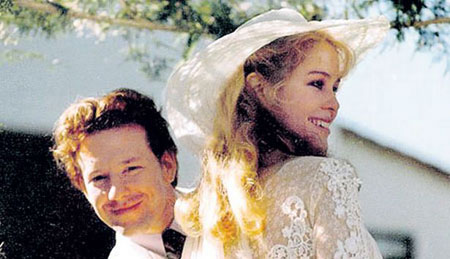 The duo married in November of 1981 married in a chapel on a clifftop above Los Angeles.

Sources reported that Mickey was the wedding planner as he planned every single aspect of the wedding. He even designed his wife's wedding ring of diamonds and rubies.

The duo was happily married for eight years, until in 1989 when the couple decided to get divorced. 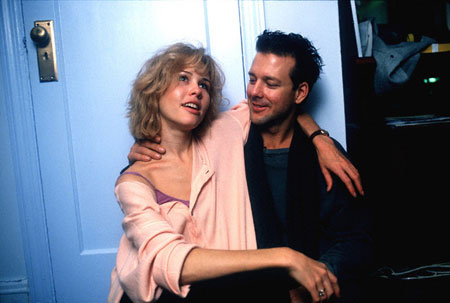 In an interview with Mirror.co.uk, Mickey's ex-wife, Debra revealed all the details about Mickey unknown past and their marriage.

She confessed how this tough looking guy was, in fact, a terrified neurotic and phobic person who wanted much love, care, and security.

"He is the most thin-skinned, over-sensitive person I have ever met. When we met he was like a little abused dog. He was so vulnerable.

He hated flying and he wouldn't go in the ocean because he was afraid there'd be sharks. He was so nervous."

In their decade-long relationship, fame and money changed the insecure actor to a self-destructive, drug abuse. She also stated that his drug addiction and insecurities became the major reason behind their divorce.

He gradually became self-controlling and abusive and didn't even let Debra work on movies because of his jealousy and controlling habits.

Their marriage finally ended in 1989 but has still remained good friends over the years.

Debra moved on with her life and married her husband Scott Fuller, with whom she has a daughter named Ruby.

The then rising star, Mickey Rourke already had enough girls to woo him as he was one of the most handsome and desirable actors in the industry at that time. 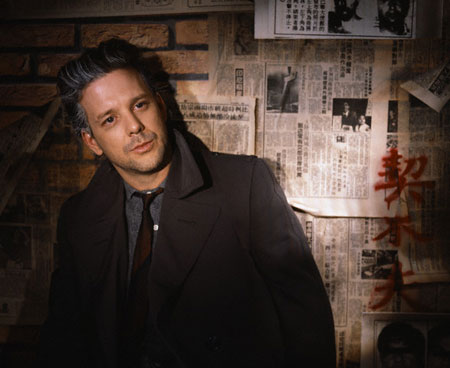 Mickey Rourke on the sets of Year of the Dragon, 1985.
Source: The Selvedge Yard

However, after his divorce from the first wife, he was all set to settle down again and he married his co-star of movie Wild Orchid, actress Carre Otis. 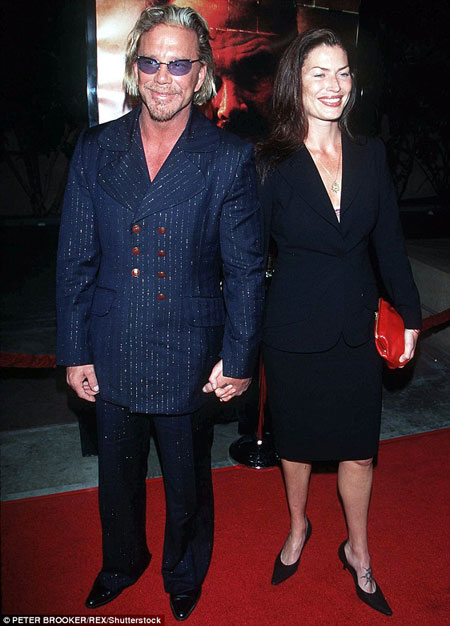 The couple tied knots on June 26, 1992. But behind this love story, there hides a dangerous, life-threatening romance, we could never even imagine.

Model turned actress Carre was just 20, when she first met Mickey on the sets of her debut film, Wild Orchid.

Spellbound by the young actress's beauty, Mickey was already head-over-heels for the actress and his charm and humor won over the beautiful actress and they started dating. 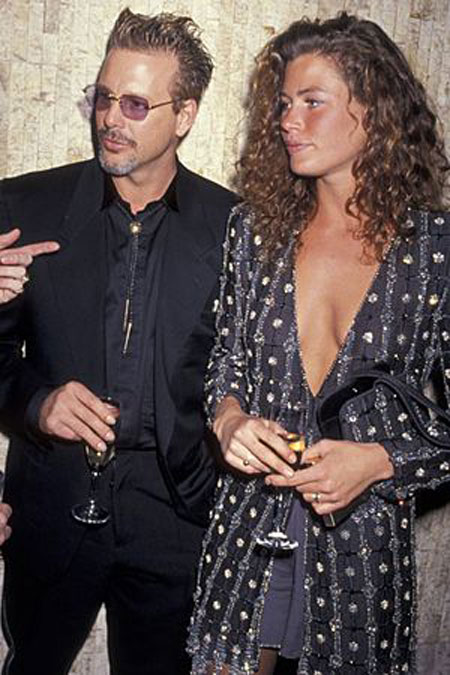 Despite everything, Carre was still not happy as she revealed in an interview back in 2011.

The then actress confessed that her relationship with the actor was very depressing and troublesome as he was jealous, insecure and angry all the time.

The actor whose face was recovering after many bouts he took in the ring, also took up plastic surgery to have a makeover of his face. 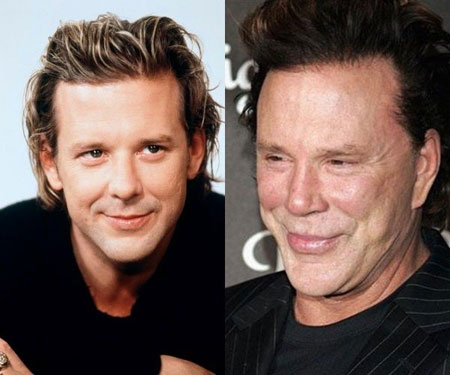 Mickey Rourke- Before and After plastic surgery.
Source: Pinterest

He started getting cheek implants, botox, and several other things that apparently didn't turn out to do well, ending him up with the stretched and craggy face.

He revealed about his painful times to the Mail Online, quoting,

"Most of it was to mend the mess of my face because of the boxing, but I went to the wrong guy to put my face back together.

I had my nose broken twice. I had five operations on my nose and one on a smashed cheekbone."

Mickey with his surgery failure, drug abuse, and alcohol addiction, committed domestic violence and even once shot her then-girlfriend Otis.

She recalled this horrible incident and stated,

"We were almost at the restaurant when I looked down and saw a .357 Magnum gun on the floor near my feet.!!

And when asked to get rid of it, Rourke made her carry the weapon in her bag and when they got home, the Magnum accidentally got discharged from her purse, leaving a bullet lodged just inches away from her heart. 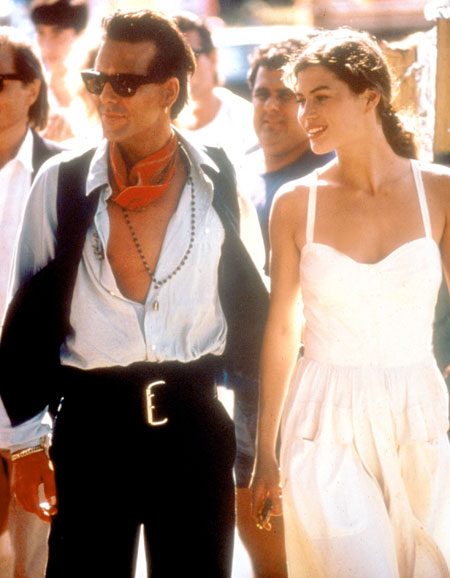 In 1994, Rourke was arrested for domestic violence and spousal abuse but the charges were withdrawn by Otis sooner. Their marriage finally ended in December 1998 when their divorce was finalized.

The two hit off pretty well and were often spotted going on events and parties together. 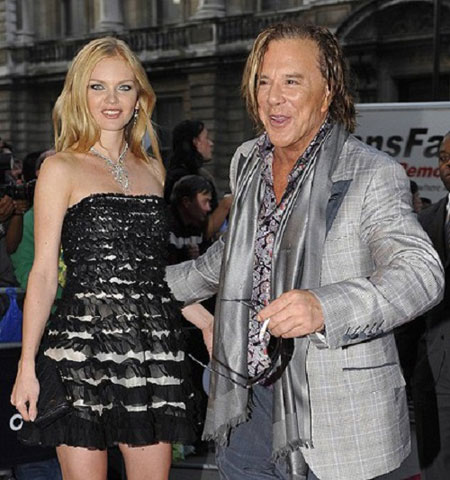 Rumors were swirling up on the news that the two were soon to be a lawfully wed husband and wife as the couple got engaged secretly in 2009. 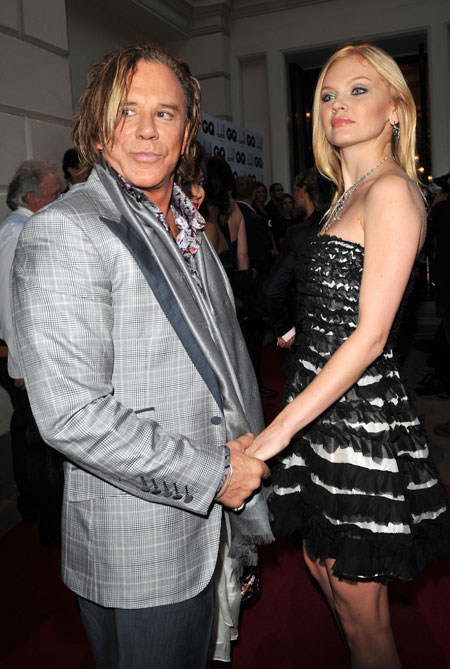 Rourke with then-girlfriend at a red carpet event, 2009.
Source: Celebitchy

Sources reported that the couple was planning to wed in 2010, organizing a traditional Russian wedding.

But their wedding was called off and two split up after one year of relationship together.

After his break up from hot Russian girlfriends and models, Anastassija Makarenko, Gia Carangi, and Elena Kuletskaya, Mickey is back again in the dating pool as last year, he was spotted leaving a hotel with a hot blonde. 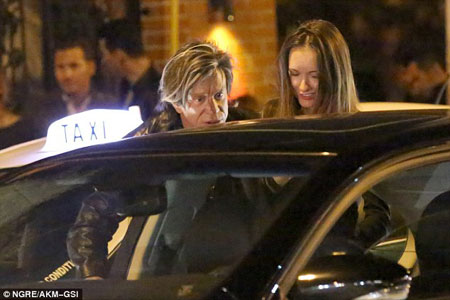 The 63-year-old film actor has seemed to take a break from models for the past, but not until now as in March 2016, he was spotted escorting a gorgeous lady out of West Hollywood Venue, reported by DailyMail. 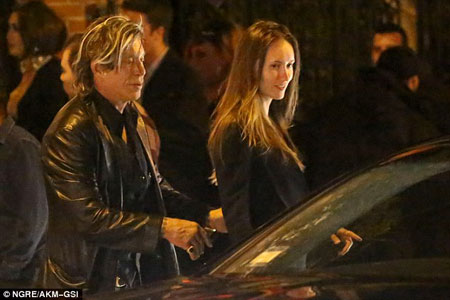 Mickey Rourke in his leather jacket with the blonde beauty spotted walking towards their car.
Source: DailyMail

The actor, however, has not confirmed anything about who he's dating and the identity of the hot blonde by his side.

Well, as for now, he has made comeback in boxing and has even won several exhibition matches.

He lives with his family and his beloved dogs, to whom he refers to as his rescuer and a life saver.

Another day another nickle

All in all, we wish this actor best wishes in her future endeavors and hope he makes a comeback in the film industry soon.

For more recent news and updates about your favorite celebrity, keep following our page!