Home Article Missy Peregrym's boyfriend, actor Zachary Levi married her in 2014 and they split in 2015.

Missy Peregrym's boyfriend, actor Zachary Levi married her in 2014 and they split in 2015. 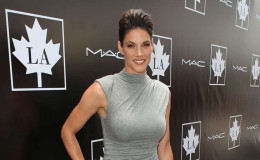 Missy Peregrym and Zachary Levi were a thing a few years ago but nobody knew they were dating again until they told everyone about their secret marriage.

Wonder what happened to the playful couple who broke up less than a year later.

Missy and Zachary were spotted together several years ago. They were believed to be dating but later on broke up.

Missy and Zachary have then been involved romantically with other people. However, when they let everyone know that they got married, nobody knew they were dating again, to begin with.

Also, see; Is Martin Garrix has a girlfriend? or is he gay and has a boyfriend

@mperegrym Hey, thank you. Name the place and time. I’ll bring my own mug. Not my typical move, but I’m feelin like takin a chance.

The couple suddenly started flirting openly on Twitter and informed the big secret of their wedding through a Twitter post. It came as a shock to everyone as nobody even knew that they were dating again.

The duo found a great way to avoid all the questions asked and also managed to grab all the attention through the public posts.

The former Chuck actor posted a tweet saying that his dreams and goals were working out to which Missy replied by tweeting that she would love to hear about it on a coffee date.

The silence broke when Missy tweeted “That coffee date was UNREAL @zacharylevi,” and added a hashtag saying “#marriedinmaui.”

A picture was attached to the tweet in which Zachary and Missy were wearing hoodies with “MR” and “MRS” printed on them.

Zachary said in an interview with E! that it was nice to have the small wedding which was beautiful, excellent and intimate but he did feel bad for not having friends and family there.

At the 'A Night at Sardis' event, benefitting the Alzheimer’s Association, in Beverly Hills, Levi said that nobody can prepare one for marriage hinting the struggles of his marriage. “Marriage is a whole either animal,” he added.

He also said that there is no easy way out of a marriage as one has out of a relationship.

“With dating, you can be ‘Hey, it’s not working out,’ and you’re out. But marriage, you make a commitment. The easy outs you don’t have anymore. You’re responsible for another person’s life as they are yours."

Levi also said that he was in no rush to be a dad as he wants to make a great dad but that the couple was too busy doing themselves.

A goofy picture that missy shared just months before their split

Zachary and Missy split after a less than a year of marriage citing irreconcilable differences but their divorce was listed on December 3 which is less than 6 months of the start of their marriage.

It is known that the pair does not own any property together and nor do they want spousal support from each other.

Missy has then made several tweets about love, life, and romance and has denied them having any connections with the end of her marriage.

"True love never simply declares itself."
May my actions be louder than my words. May my choices build and prove my integrity in love.

*Deep sigh* for our broken world and broken hearts
??

As far as we know, Missy does not have a boyfriend right now but is definitely waiting for the right man to sweep her off her feet.

The FBI star shared the blessed news about the wedding via Instagram two days after the ceremony.

A reliable source reported that it was an intimate ceremony surrounded by loved ones; friends and family members. The Insider said,

"It was an intimate and fun evening shared with family and close friends."

'Typical of Missy and Tom, there was an enormous amount of love and a lot of laughter.'