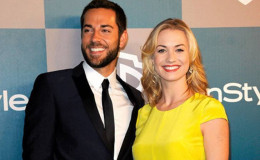 The sexiest American actor Zachary Levi is well known as the star of the popular movie 'Thor: The Dark World.' The phenomenal actor has won the heart of millions of fans with his talent and hard work.

Lately, he is dating Yvonne Strahovski, however, prior to Yvonne, he was married to Missy Peregrym, unfortunately, the couple end up with divorce. His personal life seems interesting. Let’s find out more about him and his relationship status.

Zachary Levi and Missy Peregrym tied the knot in 2014. They shocked all their fans by getting secretly married.

Things were perfect between the two but for some things changes with the passage of time and there was one of those. Because of their personal differences, the pair called it quit and officially got divorced just after ten months.

According to the report, Missy filed for divorce in L.A stating that the pair did not have any property together and none of them is requesting spousal support.

Levi’s extra-marital affair seemed to be the reason behind their divorce. Later, she married Australian actor Tom Oakley in Los Angeles on 30 December 2018.

Is Zachary Levi Dating Someone At Present?

Levi is currently rumored to be dating actress Yvonne Strahovski. Fans wondered if Zachary has been secretly dating Chuck-c-star Yvonne Strahovski after witnessing their Instagram hangouts as a sign they were chasing offscreen romance.

That might not be real though, as Strahovski wed her long-time lover Tim Loden since 2017 and have a baby together. She and her husband welcomed a baby boy on October 16, 2018.

Daring rumors between Levi and Strahovski is probably a hoax cause the Australian actress still wears a dazzling diamond wedding ring given by her beau.

The couple was spotted together on various occasions. They were spotted at a baseball game in 2015. Zachary and Yovanna have also worked together in the hit spy action-drama series, ‘Chuck’ as his love interest.

We must say the duo has such an amazing on-screen and off-screen chemistry and they surely look amazing together.

Yvonne posted on her Instagram of Levi walking on a bridge in Los Angeles.

A photo posted by Yvonne Strahovski (therealyvonnestrahovski) on Oct 13, 2015 at 11:15am PDT

The pair was also nominated for Best action actor and actress for the Teen Choice Awards.

The pair, however, has not confirmed or denied their relationship rumor.

As per the current report, Strahovski is single. He has been busy with work and is not giving much of a time for any relationship. According to him, he is taking a much-needed break from all the relationship drama.

Yvonne Strahovski's Past Relationship And Affair

Prior to Levi, Yvonne previously dated Matt Doran, an Australian actor. The pair was together from 2006 to 2007. Matt is well known for playing ‘mouse’ in the movie ‘The Matrix’.

Levi was also rumored to be dating actresses including Rachael Taylor, Caitlin Crosby, and Yvette Nicole Brown in past.

He began his career from the FX Television movie Big shot: confession of campus Bookie. In 2007, he appeared as a starring role in Chuck.

Similarly, in 2011, he was ranked the 97th on the list of TV’s sexiest men and also hosted web documentaries, Tomb Raider.

In January 2015, Levi was a lead member of the cast of NBC's 13-episode miniseries Heroes Reborn as Luke Collins and guest-starred as Abraham Lincoln in the Hulu original series Deadbeat.

Besides that, he also featured in a music video. In 2010, he appeared in the music video ‘Terrified’ along with Katharine McPhee.

He's worked on the soundtrack of the movie Tangled singing a duet 'I See the Light' with co-star Mandy Moore. They also performed the song at the 83rd Academy Awards as it was honored in the Oscar nomination for Best Original Song.

He is doing really great in his professional life and we wish him to be happier and successful in his personal life too.