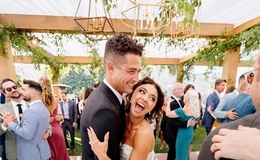 A regular face on the widely loved reality series Love Island these days, Sarah Hyland has been a staple on the small screen for most of her career. Fans have witnessed the actress transcend from her late teenage years to become a beautiful young woman in the much-loved ABC sitcom Modern Family, where she played the wry and naive Haley Dunphy. The Emmy-winning sitcom, which ran for eleven seasons, came to an end in April 2020, but fans' curiosity and interest in Hyland's love life remain as high as ever.

Sarah Jane Hyland, 32, rose to fame after starring in the ABC sitcom in 2009, although her career as an actress goes back to 1997 when she played Howard Stern's daughter in the biographical comedy Private Parts in 1997. Hyland's other credits include Annie, Lipstick Jungle, and Struck by Lightning. Besides her so-far-so-good work profile, Hyland is also widely adored for her candid stance on her struggle with a chronic illness and mental challenges. Sarah was diagnosed with kidney dysplasia as a child and has undergone two kidney transplants.

Sarah Hyland Got Married Earlier This Year in August!

Hyland's 10.1 million followers on Instagram are well familiar will the actress's enviable lifestyle with her husband, Well Adams, The Bachelorette alum. Judging from their frequent loved-up posts, the newly married are seemingly still in their honeymoon period. Hyland married the love of her life on August 20, 2022. It was an event to remember, at least for Modern Family's die-hard fans, as Hyland and Wells' dreamy wedding brought together the whole cast of Modern Family, including Sofia Vergara and Jesse Tyler Ferguson. 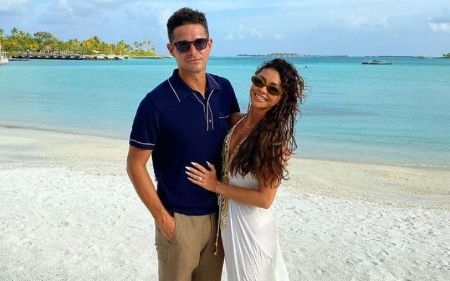 Although not many, Hyland has suffered her share of bitter-ending relationships in the past, and when the Modern Family alum did find the one in 2017, she made sure to keep it loud and proud. Hyland met Adams in 2017, and it all began on Instagram. The New York native revealed Wells "slid into her DMs," and Hyland liked what she saw. "I was single, obviously, and was like, 'this is really awesome. You're being very forward but confident and sexy, and I like that," Hyland recalled on Jimmy Kimmel Live.

The duo's Instagram-born romance came to light in October 2017, and it was a matter of days before insiders confirmed the two had indeed taken their relationship up a notch from the digital platform. Adams ultimately became Instagram's poster boy for the most supportive boyfriend, with his consistent posts about Hyland and his utmost support for the actress throughout her health scare in 2018, when she received her first kidney transplant, and years following as Sarah's struggle with her health continued. 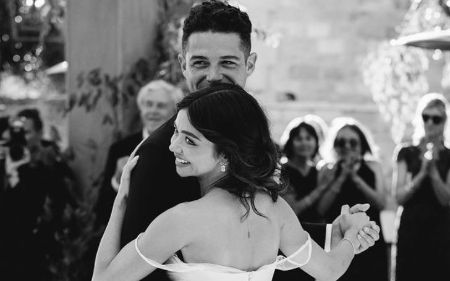 Hyland and Adams's wedding was delayed due to the pandemic. SOURCE: Instagram

The twosome announced their engagement on July 16, 2019, and everyone saw it coming. "We just moved in together, so I think we're still kind of, like, feeling each other out, but it's gonna happen eventually," Adams had said while dishing on his plans on proposing to the Modern Family actress. Everything was going perfectly to their plans, and then Covid happened. Like many awaiting betrothed couples around the world, Hyland and Adams' dream for a swift wedding was also put on hold.

"All of my family is mostly on the East Coast, so for them to fly out, just ages and, of course, with my health risks, we want to be as safe as possible," Hyland said while announcing their wedding delay. While many resumed their nuptial plans when the Covid fear started to die down, the duo remained extra cautious. Citing Sarah's health problems, Wells said, "Sarah is immunocompromised. She's a transplant recipient, so she takes pills so that she doesn't reject this new kidney in her body. We have to be super careful about the pandemic." 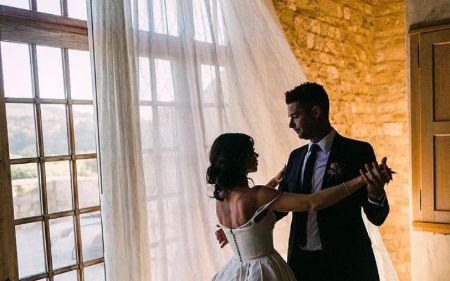 The couple's long-awaited wedding took place at a vineyard in California in August. SOURCE: Instagram

After a two-year-long delay, Hyland and Adams held their long-awaited wedding in California on August 20, 2022. The duo's wedding was officiated by Sarah's co-star Ferguson and his husband, Justin Mitika. "There was dancing and partying and then it kind of stopped, and people would eat a little bit. And then dance a little bit more. It was a fun back and forth," Wells said about their vineyard wedding.

Hyland had just become a household face when she started dating her Geek Charming co-star Matt Prokop in 2010. It was a long-term relationship for the Private Parts actress, but it was a futile stretch. Despite being in a healthy and happy relationship with her husband, Hyland alleges that she is still haunted by her time with Prokop, against whom she obtained a restraining order in 2014. 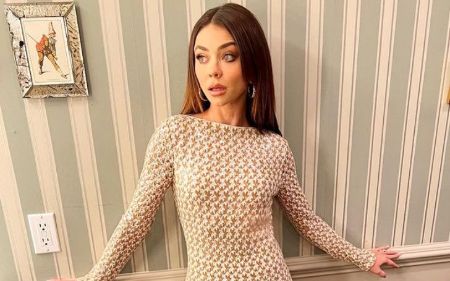 Hyland was in an abusive relationship with Matt Prokop. SOURCE: Instagram

"A lot of people like to think that once you’re out of an abusive situation, it ends there, but it doesn't," Hyland explained in an interview this year. She added, "the emotional trauma and scars on the soul stay there, and they impact you for the rest of your life if you don't get help." Sarah and Matt in 2008 while auditioning for High School Musical 3 and connected on the sets of Geek Charming in 2010. The actress even gushed about her then-beau on a few occasions.

Hyland obtained a restraining order against Prokop in 2014!

"He helps me with my medication and takes me to doctor appointments and all the stuff that I need to do to take care of myself. Any other 21-year-old guy would not be there, I guarantee it," the Love Island host said one time. Hyland and Prokop's toxic relationship came to the surface in 2014 when Hyland filed a permanent restraining order against Matt and unveiled Matt's abusive behavior toward her. Following her split from Prokop, Hyland dated her Vampire Academy co-star Dominic Sherwood from 2015 to 2017.