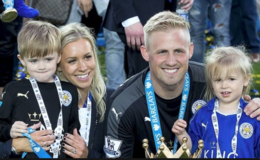 Kasper Schmeichel has been lucky with his career and marriage both, to say at least. And here's what you need to know about the happily married life of Kasper.

The Leicester City Football Club & professional Denmark key goalkeeper Kasper Schmeichel is known for agility and world-class saves. Off the field, Schmechel also enjoys marital bliss with his lovely wife of more than six years, Stine Glydenbrand. But how did it all begin? 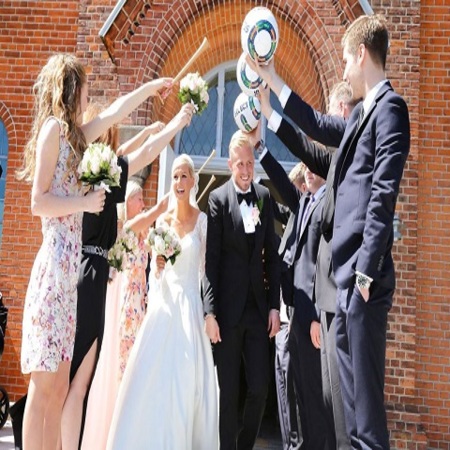 Well, Kasper Schmeichel met his future wife, Stine Glydenbrand, for the very first time at the age of only seventeen in 7-Eleven Norreport Station. It was indeed love at first sight, and the rest is history, to say the least.

Soon after dating for several years, Stine and Kasper officially decided to walk down the aisle in 2015. The wedding took place in Danish Egebaeksvang Church where the couple looked very delightful with a huge smile on their face. The bride showcased her white custom-designed gowns with flowers in her hand, whereas the stylish groom boasted his black tuxedo on their big day. 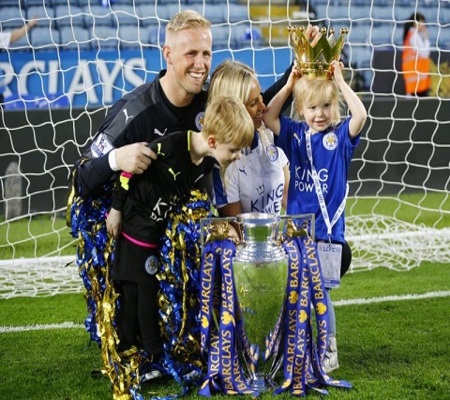 A picture of Kasper Schmeichel with his family and trophy. SOURCE: Instagram (kasperschmeichel)

A notable moment from their wedding included when the ladies upheld the wooden stethoscope while men raised a football. The acts were made to pay respect to the respective professions of the bride and groom.

Additionally, the Danish goalkeeper also faced a backlash & criticism in the past on his relationship when the lovebirds welcomed their son Max Schmeichel before marriage in 2010. However, it didn't bother the couple as they went on to give birth to the next child, a baby girl named Isabella Schmeichel, in 2012.

Likewise, Stine also shares a close bonding with her in-laws, Peter Schmeichel and Bente Schmeichel, the mom, and dad of Kasper.

How Rich is Kasper Schmeichel?

The footballer Kasper Schmeichel is quite rich. Kasper has summoned a whopping net worth of $25 million. Most of his earnings are collected from brand endorsement deals, club salary and bonuses.

Not to mention, Kasper owns a lavish family mansion, a collection of expensive cars & an American Cooper Bike. Also, not to let it go, the goalkeeper signed a contract of €6.7 million Euros which further increased his wealth.

Watch the interview of Kasper Schmeichel before the game vs England.

Apart from this along with his wife, Kasper is also involved in humanitarian cause. They have co-founded non-profit organization FodboldFonden to help needy people. Besides, the Leicester guard was also seen paying tribute to late owner Vichai Srivaddhanaprabha who died in a helicopter crash.

For more news and articles,, stay updated with Married Wiki.