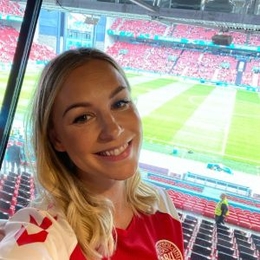 Stine Gyldenbrand is best known for being the wife of famous footballer Kasper Schmeichel. She is also the co-founder of the charity organization, Fodboldfoden.

Stine Gyldenbrand rose to fame after marrying footballer Kasper Schmeichel who plays for the Danish national team and the English club, Leicester City Club which won its historical win at the 2015-16 premier league season. 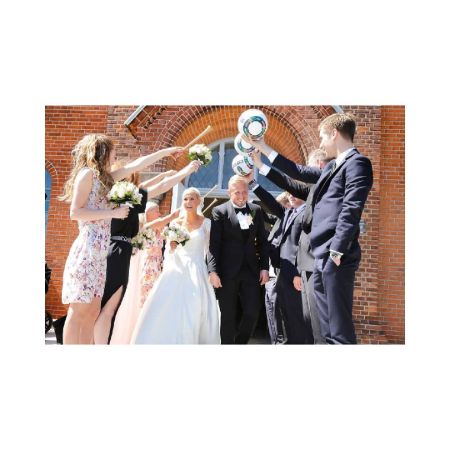 Interestingly, talking about her love story, it's indeed no less than a fairy tale. Well, they met for the first time in 2004 at seven-eleven on Norreport Station. At the time, Kasper was just 17. Soon after becoming close friends, it didn't take long for them to fall in love.

The duo was even criticized and made controversial remarks when they first welcomed a son named Max Schmeichel in 2010 and a daughter Isabella Schmeichel in 2012 before they got hitched. But, it didn't bother them. 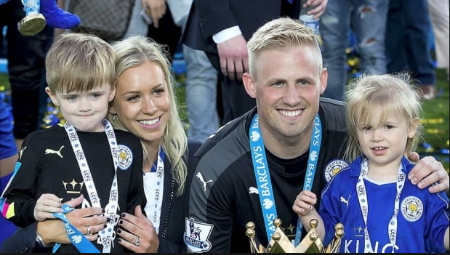 Likewise, Stine decided to walk down the raise with her boyfriend turned husband, Kasper Schmeichel, on June 22, 2015. The wedding of Kasper and his wife took place in front of a few friends and guests at Egebaeksvang Church, Denmark. The event was made further special when ladies held wooden stethoscopes up to represent Stine's medical profession. Men, on the other hand, raised football to honor Kasper's football career.

Stine looked like a princess in a white dress during the nuptial, while Kasper wore a black tuxedo. Further, she is spotted in public with her hubby at big football events, matches, and dinner dates. Stine and Kasper have been together for more than a decade now. Also, the good thing is the fact there has never been any rumor that triggers their chances of the split. Nevertheless, it won't be wrong to say Stine and Kasper are truly a match made in heaven.

Stine Gyldenbrand is a kind-hearted woman. Together with her husband, she has made the lives of kids who are going through harsh situations easier after founding  Fodboldfoden. Fodboldfoden is an organization that raises funds for disadvantaged and needy kids. 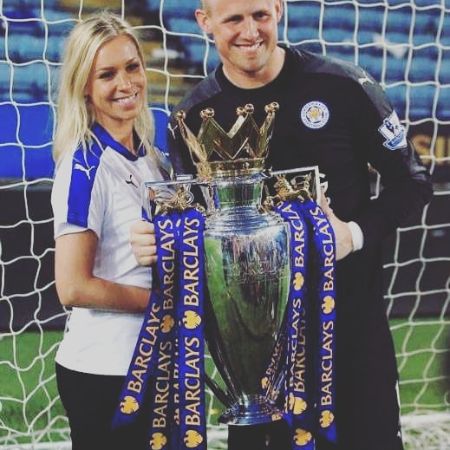 A picture of Stine Glydenbrand with her husband with a premier league trophy. SOURCE: Stine Gylgard Instagram

In fact, the family believes in giving and creating smiles. Moreover, the couple is involved with philanthropy work as they also founded the Glydenbrand Schmeichel foundation in 2012. Basically, the organization is committed to helping maternal mortality in Africa.

Stine Gyldenbrand - Profession and Net Worth

Sting Gyldenbrand serves as a midwife at a hospital near Birmingham. It generates her quite a good fortune, no doubt. As for her husband who is a professional football player, he earns an annual salary of $6,760,000.

Watch the video of Kasper Schmeichel with his wife Stine Gyldenbrand at Terkel event.

Talking about this family's net worth, it shouldn't be less than $10 million considering Kasper's salary from his club's contract and footballing career. Nevertheless, the family of four lives a luxurious life without any financial strain. The duo often enjoys romantic date nights and lavish travels from their earning.

Stine Gyldenbrand walked down the aisle with her boyfriend turned husband, Kasper Schmeichel. The wedding took place on June 22, 2015.

Max Schmeichel is the son of Stine Gyldenbrand and her husband Kasper born in 2010.

Isabella Schmeichel is the daughter of Stine Gyldenbrand and her husband Kasper born in 2012. She has a sibling named Max Schmeichel.