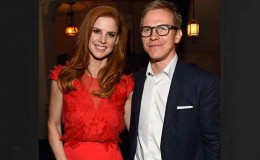 You may know Sarah Rafferty, the actress who played the role of Donna on USA network's hit show "Suits". She played a formidable and witty character in the series and was loved by the fans all across the country.

However, today let us also discuss her personal life. She has been happily married to Santtu Seppala and the couple also has two children. They are living a very happy family life as a perfect husband and wife with no rumors of a divorce. Let us find out some more facts about the adorable couple.

Sarah Rafferty's Marriage With Santtu Seppala; Are They Still Together?

Santtu and Sarah Rafferty married in 2001 and the pair is going strong ever since. They first met their college days at Yale University.

When your leading man is a prince who keeps you smiling through #nightshoots in beautiful but freezing #britishcolumbia. Thanks @spage33.

They tied the knot on June 23, 2001, in a Roman Catholic Church of St. Mary in Greenwich, Connecticut and it was performed by Rev. Alfred Riendeau.

Who is Aleksanteri Olli-Pekka "Santtu" Seppala

Many of us don't know but Santtu Seppala is a stock research analyst in the asset management unit of Lazard Frères & Company which resides in New York.

He was born to Mr. and Mrs. Antti V. Seppala of Lake Forest. His father is an independent pharmaceutical industry consultant in Lake Forest.

Santtu also did his graduation from Yale University and met Sarah there. They started dating each other and eventually, tied the knot. After his graduation, he did his M.B.A from the University of Pennsylvania.

In the end, All We Need Is A Happy Family

Sarah and Santtu, both have been happily married and they seem to enjoy their life very much. Sarah regularly uploads the pictures of her family, enjoying and relaxing together.

Seems both of her daughters are happy and one of them has learned gymnastics as well. Both of both is a very happy couple who enjoys their life with and add to the two adorable daughters they have, they look like the happiest couples.

You May Like: American Journalist Jane Mayer, Know about her Married life with Husband William B. Hamilton including her Journalism Career