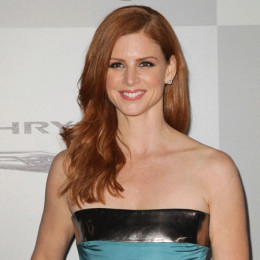 Sarah Rafferty is an American television and film actress who is widely known for starring as Donna in popular USA Network series Suits. Besides that, she has also appeared in other popular TV series like Six Feet Under, CSI: Crime Scene Investigation, and Bones.

Sarah Rafferty is an American television and film actress who is widely known for starring as Donna in popular USA Network series Suits. Besides that, she has also appeared in other popular TV series like Six Feet Under, CSI: Crime Scene Investigation, and Bones.

Sarah is an officially a married woman. Couple's marriage was performed in the Roman Catholic Church of St. Mary in Greenwich, Connecticut and it was performed by Rev. Alfred Riendeau. There has been no rumor or gossip regarding her extramarital affair with anyone which proves that she is very faithful towards her husband Santtu Seppala. The couple is already parents of two beautiful daughters.

Television actress Sarah Rafferty is married to her long-time partner, Santtu Seppala for about two decades now. Sarah met her husband for the first time at Yale University. After dating for several years, the pair turned a boyfriend-girlfriend relationship into holy matrimony on 23rd June 2001.

We attempted to make a @suits_usa #bts video and all we got was this stupid blooper reel, and more proof that we have no chill. Thanks Suitors for tuning in to our mid season finale, and tweeting with us through out the years. We’re so grateful for all your support. Fingers crossed, there will be many many more to come. Xoxoxo ­¤śś­¤ż¬ŌØż’ĖÅ cc: @iamgabrielmacht

Their wedding ceremony was held in a Roman Catholic Church of St. Mary in Greenwich, Connecticut. It was organized by Rev. Alfred Riendeau. At present, Rafferty and Seppala are blessed with two adorable children; Oona Grey(October 22, 2007) and Irish Grey (2012).

Once, news had it that "Sarah Rafferty and Rick Hoffman secretly married". However, the American actress proved it wrong marrying her longtime beau, Santtu Seppala in 2001.

Sarah Rafferty has an estimated net worth of $5 million. Additionally, she received an annual salary of $300,000 and a monthly salary of $25,000 in 2015. Sarah is still caught up with her professional acting career so her net worth is still incrementing.

Surprisingly enough, she owns a white GLK350 Mercedez car is worth $49,000.  Moreover, Rafferty also shared a lavish West Hollywood home with husband Seppala which she sold for $110,000 more than the $2.35 million asking price.

The single-story floor plan consists of a garden view dining room, a spacious living room, three bedrooms, and two bathrooms. In the same vein, their detached studio has an additional living area and bathroom too. Outside, a tiled waterfall feature creates a backdrop for a swimming pool and spa.

She is the youngest among four children of her parents Mary Lee Rafferty and Michael Griffin Rafferty Jr. According to her, she was highly inspired by her parents to be in an acting career. In 1989 he graduated from Phillips Academy.

Then she attended Hamilton College where she majored in English and Theater. She debuted in an acting career in 1989 from television movie named Trinity. She has also appeared in movies like Speakeasy (2002), Soccer Dog: European Cup(2004) and Falling for Grace(2006).

He holds degree in M.B.A. from the University of Pennsylvania. Currently he is working as stock research analyst. They are parents of two children.

She is very pretty and gorgeous. She is the youngest daughter of the family.