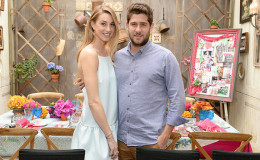 On 7 November 2015, one of Hollywood’s adorable couple Whitney Port and Tim Rosenman made their relationship official and got married.

The couple who announced their engagement in 2013 has begun dating in 2012. As of now, they seemed very happy together and we wish them to remain the same for the rest of their life.

The reality star-turned-designer Whitney met Tim on the sets of ‘The City’ in 2012, where he was working as a producer.

Port even said that she was the one who made the first move with her now-husband Tim as he was not willing to cross his line as a producer.

“I definitely made the first move. I got his phone number and made up some excuse why I needed to reach him for something.”

“I kind of felt he was never gonna try it with me. He’s not shy but I know in his past with girls he had difficulty making the first move.”

“We got really close while we were on the show but didn’t start dating until after."

Well, if Port did not have made the first move they would not have found each other. We must say she is a quite brave and romantic girl.

Engagement Of The Adorable Couple

Unlike other couples, Whitney and Tim did not wait much longer for the commitment in their relationship.
After dating for only one year the couple got engaged in November 2013.

‘The Hills’ star was more than happy to flaunt her engagement ring in her web series ‘New Style’ which was about hair products.

Don't Miss: Television personality Whitney Port is Pregnant with first Child with her Husband Tim Rosenman, Know about Their Married life and Relationship

Tim proposed her Australia, with presenting a ravishing oval stone, rose gold band with three rows of diamonds.
While describing the moment when Tim popped the question Whitney said, “I was very surprised! He was planning a whole ordeal—Like possibly taking out a boat and doing this whole thing on the harbor, and then it was like the day before we were leaving and it was really rainy and grey and cold”.

She added, “So everything went down the drainpipe there. So he just did it in our hotel room, he asked really low key.” Sweet Isn't it?

When asked about what was her reaction she said, “I cried a lot. I was first screaming. ‘No!’ out of disbelief And he was like, ‘You mean yes??’ And I said, ‘Yeah! Of course!’”

Finally, on 7 November 2015, the couple got married in Palm Springs, California. They had a ‘desert-chic meets Art Deco meets tropical’ themed wedding ceremony.

Whitney, along with her closest and dearest friends traveled to Mexico to celebrate her wedding, it was a sun-filled hen party.

After the wedding, the newlywed gave an interview to US Weekly stating, “It’s such a great feeling! We finally get to stop saying fiancé and be husband and wife!”

They further added, “We really always knew we would end up together and now we can start a new amazing chapter in our lives. The wedding was everything we hoped it would be and will cherish the memories for the rest of our lives.”

My Husband, Timmy: the man that stands by me through life and my career. As a producer he always helps me come up with bigger and better creative ideas. His support keeps me stable and I can’t thank him enough! Tune in TONIGHT at 9/8c to witness another set of partners in crime on @abcnotorious #Notorious at 9|8c on ABC #sponsored

Well, all the very best to the lovely couple for their upcoming future.

So this is from the day we got married and nothing has really changed. I'm still dancing like a… https://t.co/JbcHzAAiXm

Prior to Tim, she was in a relationship with Australian guitarist Jay Lyon for about one year from 2008 to 2009.

Though they were dating for a short period of time their relationship became the talk of the town and was even recorded on the show, ‘The City’.

Similarly, Whitney also dated Ben Nemtin in 2010 but broke up with him within the year. Maybe all those relationships of her did not work out because she had to meet Tim one day.

Currently, she is living a fairytale life with her husband Tim Rosenman.