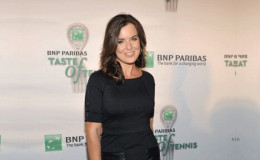 Popular TV Meteorologist Amy Freeze has been living a successful and blissful married life with husband Gary Arbuckle since 1994.

It has been almost 22 years since the couple tied the knot and we must say their relationship is still going very strong.

They have also been blessed with the four beautiful children.

Amy Freeze and Gary Arbuckle's Married Life; Is The Pair Still Together?

Amy and Gary first met in the year 1993 when he was the mascot, Cosmo the cougar and Amy was a cheerleader at Brigham Young University.

They fell in love and got hitched in 1994. The duo then entered a weight-loss competition together and even won the show and received $100,000 as a prize. 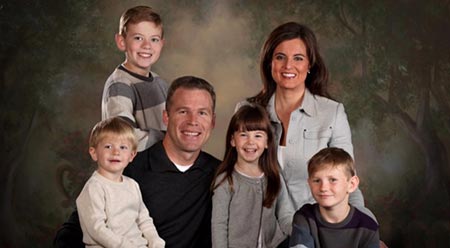 The ability to work with each other, the understanding, trust, and love that they have for each other are some of the secrets behind their successful family life.

Like in every marriage, they also must have faced various ups and down, however, the love and support for each other helped them to overcome all those problems.

Also Read: TV Meteorologist Amy Freeze Married to Gary Arbuckle and living happily with 4 Children. is she getting a divorce?

Even though the charismatic pair has always managed to live a low profile life there are no such rumors of them getting a divorce.

We wish them to have a more successful and happy married life ahead.

Four Beautiful Children Of The Couple

The adorable duo has four children together. Their elder son Tyler Arbuckle is currently at the age of eighteen who is their only biological kid and rest of them were adopted.

The pair’s other children Jared Arbuckle, 15, Kate Arbuckle, 11, and William Arbuckle, 8, was adopted. However, it does not matter as they love all their children equally.

According to Amy, all her children are very talented and well–disciplined. All of them are interested in music especially her younger son, William who loves to play the piano.

Even though Amy and Gary are very busy in their respective professional life they always manage time for their young ones.

They love spending time with each other and love each other’s company. They are undoubtedly one of the cutest families ever.

Currently, Amy is working as the weekend meteorologist at WABC-TV in New York City and also in ABC’s Good morning America.

Prior to that, she started her career working as a meteorologist for NBC’s WCAU in Philadelphia and also as a co-host of 10!, an entertainment show on NBC10.

She is a very talented and hardworking employee which is why she comes under the first twenty women in the world who has received the ‘American Meteorological Society’ certificate.

You May like: Meet Max Shifrin, Husband of Sara Haines: See their Married life and Relationship: The Couple is Expecting Their Second Child

Not only that from 2007 to 2011, but Amy was also the first female who worked as a chief meteorologist for Fox owned-and-operated station WFLD in Chicago. Illinois.

She is surely a hardworking, talented and inspiring women to all of us who is not only a successful meteorologist but also a successful wife and a mother.

A mild start to the workweek then rain Monday night into Tuesday @abc7ny #nyc pic.twitter.com/vV0nMPAhjL