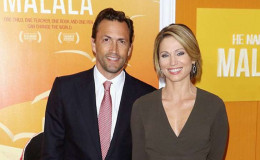 An American television journalist Amy Robach is a well-known personality who works as a News anchor in ‘Good Morning America’ for ABC News. However, her personal life is much more interesting than her professional life.

She was married to Tim Mcintosh. The couple also has two children. However, they got a divorce, and later on, she tied the knot with Andrew Shue in 2010. Let us find more about her interesting private life.

Amy Robach united with Tim Mcintosh, baseball player in 1996 after dating for a few years. They spent almost 12 years together and got a divorce in 2008.

The reason behind their divorce seemed to be mysterious. The discrepancy could be the main reason for their separation.  The couple was blessed with two daughters: Ava (2002) and Analise (2006).

Amy Robach tied the knot with Andrew Shue, founder of the social networking website Cafemom on February 6, 2010, after getting engaged in 2009.

You May Like: Veteran Journalist Leon Harris Joined NBC4/WRC after 13-years at ABC News. See his journey through the years

Approximately 120 guests attended the couple’s wedding ceremony. Together the couple is raising two daughters from Amy’s previous marriage and Andrew’s three sons from his former marriage to Jennifer Hageney.

In 2013, Robach revealed on ‘Good Morning Show’ that she has been diagnosed with breast cancer. She also revealed that it almost ruined her family Life with Andrew Shue.

The couple celebrated Valentine's Day 2019 in the best way they could!

The way we were.. and still are My Valentines

'The Good Morning America' host revealed that her cancer almost dragged her into emotional chaos.

It brought massive ups and downs in the relationship, but therapy actually kept them together.

Shue was by her side all the time as a supportive husband. The couple believed that cancer made their marriage solid and strong.

Robach’s has undergone six months of chemotherapy and reconstruction surgery. Now, Robach is cancer free and is living a happy life with her wonderful family.