Home Article What is Psoriasis? Its Causes and Treatment-Celebrities Like Cara Delevingne And Kim Kardashian Are Living With The Disease

What is Psoriasis? Its Causes and Treatment-Celebrities Like Cara Delevingne And Kim Kardashian Are Living With The Disease

While we encounter many people with varied skin issues, psoriasis is one of the most persistent and baffling of skin disorders. The disease is characterized by skin cells multiplying abnormally up to 10 times faster than the normal cell growth.

While we encounter many people with varied skin issues, psoriasis is one of the most persistent and baffling skin disorders. The disease is characterized by skin cells multiplying abnormally up to 10 times faster than the normal cell growth.

The long-lasting autoimmune disease is detected by red, itchy and scaly patches on the skin. The disease is generally assumed as a genetic condition influenced by several environmental factors.

It is a chronic autoimmune condition that causes the speedy build-up of skin cells. Generally, skin cells grow deep in the skin and rise to the surface slowly and fall off eventually with time. The average life cycle of the skin cell is one month.

Though the disease can be spotted in any body parts, it is most prevalent on joints like elbows and knees.

Cara Delevingne, the English model turned actress opened up about her suffering from psoriasis. During an interview with The Times, the London-born beauty confessed that she felt hollow and so stressed because of the skin disease that made her hate her own body.

Her skin issue first came into light during Paris Fashion Week in 2013. 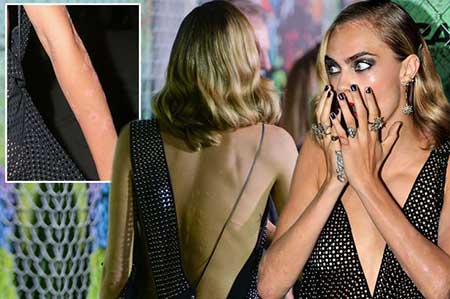 At the peak of her fashion career, she walked as many as 53 runway shows trapped in depression.

'It wasn't a good time, I was, like, fight and flight for months. Just constantly on edge. It is a mental thing as well because if you hate yourself and your body and the way you look, it just gets worse and worse.'

Not only Delevingne, everyone's favorite Kim Kardashian repeatedly takes on social media to complain about psoriasis. Sharing adorable photos of her family on Instagram, she opened up about her battle with psoriasis.

She developed the disease at the age of 30; starting on her legs and later covering much of her body. She got the hereditary disease from her mother, Kris Jenner. 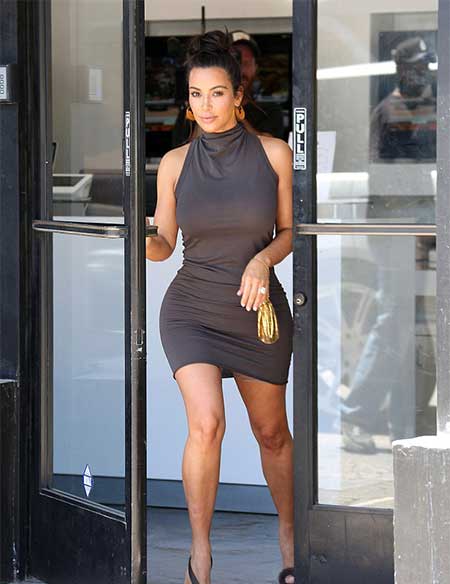 She said on Keeping Up With the Kardashians,

"I have psoriasis, there is nothing I can do about it so there is no reason why I should feel uncomfortable. So to make myself feel better I lay out all my insecurities before we start a shoot in the hope that no one will be focused on that. I just want to do fun and artsy things."

The KKW Beauty founder addressed via an Instagram story that the disease is getting better in January 2018.

Eli Roth, the American actor, director, producer, and writer also suffered from the disease when he was just 22. The star hasn't openly spoken about his psoriasis, however, during an interview for his movie Cabin Fever, he revealed that he had horrible psoriasis when he was a young boy.

"It was all over my legs. I couldn't walk because my legs were cracked and bleeding."

American former competitive swimmer and 12-time Olympic medalist Dara Torres was training for her third Olympics game in Barcelona in 1992 when she spotted red, itchy patches on her skin.

The patches on the skin can range from a few dandruff-like spots to major eruptions covering large areas. Every person suffering from the disease may encounter different signs, still, most people go through 'cycles' of symptoms.

The exact cause of psoriasis is not fully understood. However, two factors have been detected after years of research.

As psoriasis is an autoimmune condition, it is the result of the body's immune system attacking the body itself. In the case of psoriasis, the white blood cells known as T cells mistakenly attack the skin cells.

Some people inherit genes that develop psoriasis. If a family member has the same skin condition, you are most likely to develop the same disease. According to the National Psoriasis Foundation, 2 to 3 percent of people with the gene develop the disease.

The National Psoriasis Foundation and the American Academy of Dermatology are excellent sources to help find specialized doctors. The treatment options generally depend on the type of disease, severity, an area of skin infected.

Since psoriasis is inherited, it is impossible to suggest anything that can likely prevent its occurrence, however, adopting a healthy lifestyle can control the condition.