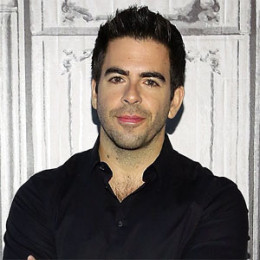 Eli Roth, an American actor, director, producer, and writer is the winner of Screen Actors Guild Award. He debuted his acting after appearing in the movie, The Horse Whisperer. Before that, Roth began to act and direct right from the school and college level. He is today with numerous hit movies. Apart from his professional life, he is currently a married man.

Born as Eli Raphael Roth on 18th April 1972 in Newton, Massachusetts, to Dr. Sheldon Roth (a psychiatrist and a clinical professor at Harvard Medical School) and Cora Roth (a painter), he grew up in a Jewish family along with his siblings Gabriel Roth and Adam J. Roth.

He is British and is of Mixed descent as his family is from Hungary, Russia, Austria, and Poland. He attended Newton South High School and later on, enrolled at the film school at the New York University.

Roth's interest in acting grew after watching Ridley Scott’s Alien. So, began to appear in more than 100 short films along with his brother before finishing his school. After that, he worked as an online cybersex operator in Penthouse Magazine to raise fund for his movies and also ran the office of the producer, Frederick Zollo.

He moved to Los Angeles to pursue his career. There he met Camryn Manheim, an actress and got his first Hollywood job in the movie, The Practice where he worked on scripts and used to stay in the dressing room.

Roth made acting debut from the movie, The Horse Whisper in 1998 where he appeared alongside Scarlett Johansson, Robert Redford, Kristin Scott Thomas, Sam Neill, Dianne Wiest, Chris Cooper, Kate Bosworth, and others. The movie did not gain much popularity, but he impressed much of the audiences and critics with his acting skills.

Thereafter he appeared in numerous movies including Terror Firmer, Cabin Fever, Don’t Look Up, Clown and others. He also made a cameo in movies like Scream 4, Piranha 3D, Rock of Ages, Hostel, Hostel: Part II and others.

While he was at NYU film school, he wrote and directed a student film called, Restaurant Dogs for which he was even nominated for a Student Academy Award and eventually won the divisions. In 1999, after moving to LA, he produced, edited, directed, wrote and also provided the voice for the animated shorts called, Chowdaheads.

In 2000, he again directed, wrote and produced the series called The Rotten Fruit. In 1995, he co-wrote a script along with his roommate, Randy Pearlstein for the 2002 movie, Cabin Fever.

After few years, he again directed, produced and wrote the movie, Hostel, and Hostel: Part II where he made a cameo. Apart from this some of his famous written, directed and produced movies include Thanksgiving, The Man with the Iron Fists, The Last Exorcism Part II, Aftershock, and others.

In 2016 and 2017, he produced a movie, Baywatch starring Zac Efron, Dwayne Johnson, Kelly Rohrbach and other. He also directed the films like Death Wish and The House with a Clock in Its Walls.

Besides all these, he also produced a kung fu movie, The Man with the Iron Fist directed by The RZA and recorded an audio commentary for Troma’s 2005 DVD.

Roth exchanged vows with his longtime girlfriend, Lorenza Izzo on 8th November 2014 on the beach in Zapallar, Chile. Izzo is a Chilean actress and even shared the screen with her husband in the horror movie, Aftershock.

They met for the first time on the movie set of The Green Inferno.

The couple divorced in July 2018. Roth filed for divorce after almost four years of marriage from the model and actress. They have no children together.

Lorenza and Eli released a statement about their divorce on their social media accounts:

'It is with deep love and rest that we are choosing to separate as a couple. We've had an incredible journey together, we love each other very much, and will remain the best of friends.'

'We are grateful for the six wonderful years together but have decided to go our separate ways to have the most fulfilled, joyous lives we can.'

Before marrying his wife, he dated Cerina Vincent and Peaches Geldof.

Roth is currently 46 years old and stands at the height of 6 feet (1.83m). He earned much from his movies and series where he appeared as an actor, director, producer and a screenwriter.

His movie, Cabin Fever collected a fund of $1.5 million from the private investor including Susan Jackson and sold it at the Toronto Film Festival for $3.5 million which became the biggest sale of the year. The movie with a budget of $1.5 million collected $30.6 million at the box office after the release.

His another movie, Hostel: Part II which was made with the budget of $10.2 million collected $35.6 million at the box office, $50 million on DVD and pay TV. His another produced movie, The Last Exorcism Part II also earned $15.1 million with a budget of $5 million.

Roth with such high earning from the movies currently has a net worth of $19 million. He also owns a house in California worth $2.54 million which he bought in 2007.

On 8th November 2014, Eli Roth married Lorenza Izzo on the beach in Zapallar, Chile. They are still together and with no such news about their divorce.