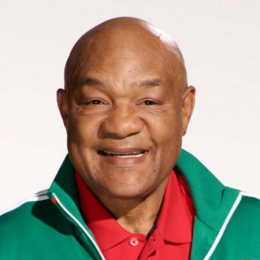 Professional boxer, George Foreman has an impressive career record on his three-decades-long boxing journey. He is a two-time world heavyweight champion and an Olympic gold medalist. Besides that, he also enrolled in authoring books, entrepreneur and ordained minister.

George Foreman, 70-year-old boxer married five times in his life though he has a miserable condition on his love affairs and relationship. As of now, he is blissfully married to his fifth wife, Mary Joan Martelly since March 27, 1985.

The duo took a boyfriend-girlfriend relationship to the next level after dating for a year. Martelly is originally from Eastern Caribbean island. The athlete and his family adorably nicknamed Mary as "Joan".

Additionally, the amazing pair along with their bundles of joy are living a happy and satisfied life. Foreman and his spouse, Mary Joan Martelly are blessed with five children-three sons and two daughters. 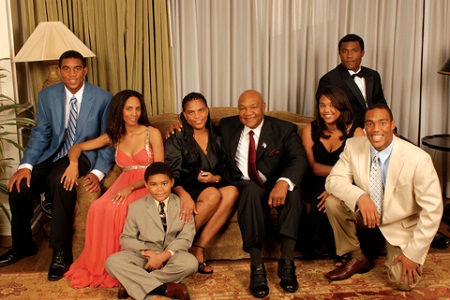 George Foreman is a married man who tied his knot with his long-term sweetheart and wife Mary Joan Martelly.

Interestingly, he is also the father of 12 children which includes five sons and seven daughters with five different partners. His sons' names are George Jr., George III("Monk"), George IV ("Big Wheel"), George V ("Red"), and George VI ("Little Joey"). The former boxer also explains why he kept his sons starting same George on his website, which includes the statement,

"I named all my sons George Edward Foreman so they would always have something in common. I say to them, 'If one of us goes up, then we all go up together, and if one goes down, we all go down together!''

Foreman, elder son George III also followed his father footsteps and pursued his career in boxing and entrepreneurship. Similarly, George IV started on the second season of American Grit, where he stood the seventh position.

Regarding his daughters' information, he is the proud father of seven daughters out of which five are of his biological daughters; Natalia Foreman, Leola Foreman, Michi Foreman, Freeda Foreman, and Georgetta Foreman. However, one of his daughters Freeda Foreman passed away at age 42, in Houston, Texas cause of an apparent suicide. She had a 5-1 record as a pro boxer and retired in 2001.

In 2009, George adopted a daughter, Isabella Brandie Lilja (Foreman), who lives in Sweden and started her career as a blogger since 2010 under the name of Bella Nutella. Equally, In 2012, he adopted another beautiful soul, a daughter, Courtney Issac (Foreman).

George Foreman's Net Worth: How Much Does He Earn? 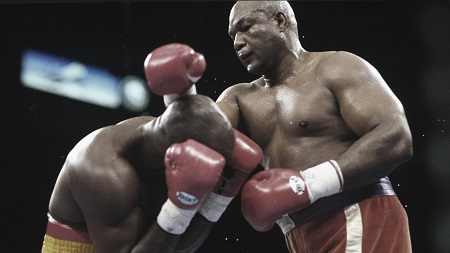 George Foreman's net worth is $300 million which he has earned from his wonderful professional boxing career.

In 1988, George made his comeback in boxing and soon top the boxers list. He also defeated the then-world heavyweight champion, Evander Holyfield, providing him about $12.5 million after the tournament. Moreover, he worked as a ring analyst for HBO for 12 years from 1992 to 1994. He also wrote a book, Fatherhood, whose price is $11.00 on Amazon.com.

George is also quite popular in advertisement world, he pitched for top brands including Meineke, Nike and McDonald's. He also worked with Salton, Inc (now under Spectrum Brands), which launched a product of his name, "George Foreman Grills". Surprisingly, within 15-year, George Foreman grill sold over 100 million units all over the globe.

Foreman soon increased his monthly income with a stunning figure of $4.5 million. Within 1999, he collected an impressive pile of green dollars $137.5 million. In 2013, he also started to promote boxing business, Foreman Boys Promotions and also owns a butcher shop, George Foreman's Butcher Shop. On the contrary, he also landed his role in NBC's reality show, Better Late Than Never.

Foreman consists of the 45-acre house in Huffman, Texas, US, where the median price of the house is $196,700. Furthermore, he is fond of cars with a collection of 40 branded cars including Ferrari, Porsche, Maybach, Tesla and his all-time favorite car, a 1977 VW Bug. He is also an animal lover, especially horses. In fact, he owns a stable of 50 horses.

George Foreman was born on January 10, 1949, Marshall, Texas. He spent his childhood in Fifth Ward along with his 6 siblings. His father's name is J.D Foreman and his mother name is Nancy Ree Foreman. During his teen period, he was known as a bully. At the age of 15, he dropped out of high school. 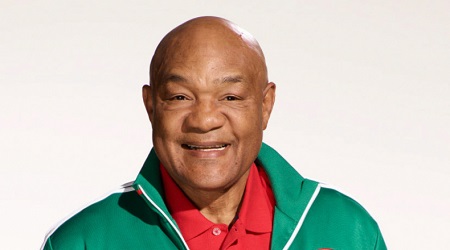 George Foreman professional is a boxer with an impressive record of his career. Within his entire career, he fought 86 matches with 76 wins which include 68 Knock Outs wins.

Despite facing 5 losses including his legendary "The Rumble in the Jungle" tournament against Mohammed Ali. Interestingly, he was honored with James V. Day "Good Guy" Award during their 95th National Convention in 2013, for his community service and patriotism.

George Foreman and Mary Joan Martelly are sharing a strong bonding in one another coordination and support since 1985.

George Foreman and Adrienne Calhoun tied their knot in 1971 in the presence of their loved ones and well-wishers and ended their relationship in 1974.

George Foreman and Cynthia Lewis tied their knot in 1977 in the presence of their loved ones and well-wishers and ended their relationship in 1979.

George Foreman and Sharon Goodson tied their knot in 1981 in the presence of their loved ones and well-wishers and ended their relationship in 1982.

George Foreman and Andrea Skeete tied their knot in 1982 in the presence of their loved ones and well-wishers and ended their relationship in 1985.

George Jr. is the eldest son of the legendary boxing legend George Foreman.

George III is the second son of the legendary boxing figure George Foreman.

George IV is the second son of the legendary boxing figure George Foreman.

George V is the second son of the legendary boxing figure George Foreman.

George VI is the second son of the legendary boxing figure George Foreman.

Natalia Foreman is the eldest daughter of George Foreman from his marriage relationship with Mary Joan Martelly.

Leola Foreman is the second daughter of George Foreman from his marriage relationship with Mary Joan Martelly.

Michi Foreman is one of the daughters of George Foreman from his secret relationship with a mysterious woman.

Freeda Foreman is one of the daughters of George Foreman from his secret relationship with a mysterious woman.

Georgetta Foreman is one of the daughters of George Foreman from his secret relationship with a mysterious woman.