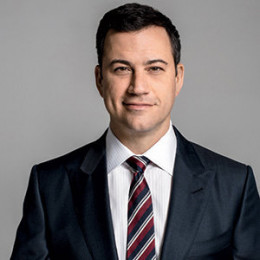 An American television host, producer, writer, comedian, and voice actor, Jimmy Kimmel is a son of James John Kimmel, an IBM executive and Joan (ne Iacono), a homemaker. He received an honorary degree from UNLV in 2013. In 1989, Kimmel landed his first paying job alongside Voss as morning drive co-host of The Me and Him Show at KZOK-FM in Seattle, Washington. Kimmel began his television career as the comedic counterpart to Ben Stein on the game show Win Ben Stein's Money, which began airing on Comedy Central in 1997.

Jimmy Kimmel married twice in his life. He is living a blissful married life with wife Molly McNearne and their two children.

Jimmy Kimmel has been married to girlfriend turned wife Molly McNearney since October 2009. His wife serves as co-head writer for Jimmy Kimmel Live.

Kimmel engaged to McNearney in August 2012 and married in July 2013. On July 10, 2014, the duo welcomed their first child, Jane. Jimmy and Molly are in a relationship for ten years and married for six years.

Jimmy and his first wife Gina Maddy Kimmel married in 1988 and divorced in 2002. They have two children, son Kevin, and daughter Katie Kimmel.

After twelve years of marital relationship, she almost disappeared from the spotlight. He had an affair with comedian Sarah Silverman from 2002 until they broke up in March 2009.

Jimmy Kimmel has an estimated net worth of $45 million. He receives a salary of $15 million. For presenting the show "Jimmy Kimmel Live, he makes $1,750,000 per episode. Some sources claim Kimmel's annual salary has increased considerably from $1.75 million in 2003 to $6 million in 2009.

Jimmy Kimmel owned a lavish Hollywood Home in Los Angeles. In September 2014, Kimmel paid out worth $2,250,000 million for a duplex structure in Hermosa. The mansion consists of 4 beds, 2 bathrooms, 3,605 square feet. The house is recently listed for $2.3 million.

Jimmy Kimmel was previously married Gina Maddy married in 1988 and divorced in 2002.They have two children.

Jimmy married Molly McNearney, a co-head writer for Jimmy Kimmel Live.The couple was engaged in August 2012 and married in July 2013.

An actress Katie Kimmel is his first child.She was born in 1991.

An actor Kevin Kimmel is his son.He was born 19th September 1993.