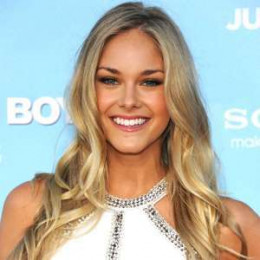 Abigail Klein, an American actress is well known for her appearance on the reality show "Dallas Cowboys Cheerleader". This blonde beauty is among those skillful personalities who succeed in every field she steps in.

Who is Abigail Klein's Boyfriend? Is She Dating Someone?

Abigail Klein, the 31-year-old actress is married to her long-term boyfriend, Christopher Armstrong since 23 October 2016. The intimate wedding ceremony was held at Malibu Beach in the presence of close friends.

In order to deepen their bond, Klein and Armstrong went for a honeymoon at Colosseum, Rome, and Paris in November 2016. Abigail celebrated her bridal shower on 7 July 2016 in Dallas, Texas.

Most of her engagement and wedding photos were clicked by her best friend, Valorie. The duo engaged on August 18, 2015, in Sea to Sky Gondola after dating for three years. Chris proposed her with a dazzling diamond ring on the very day.

On 23 October 2017, the pair celebrated their first wedding anniversary. Abigail wore a white bridal wedding gown, while Chris wore a black tuxedo. They are married for over three years now and yet, the two relish one another's a company without any rumors of divorce.

Klein dated football player Troy Aikman in 2012. They could not sort out their disputes either, and they got separated later. After the breakup with Troy, Abigail has not revealed anything about her relationships.

Klein and Aikman were caught together at an upscale Los Angeles restaurant in Boa. Moreover, TMZ clicked a video of him buying roses for Klein.

Prior to Christopher and Aikman, Abigail had an intimate relationship with an actor Tanner Beard in 2010. However, the cupid could not take their relationship further and they broke up in 2012.

Abigail has an estimated net worth of $1 million as of December 2019. Her primary source of income is a career as an actress. As a matter of fact, she receives $35-$100 thousand per hour for starring in movies and TV series.

Some of her acting credits include Pair of Kings, That's My Boy, Butterfly Caught, Transformers: Age of Extinction, CSI: Crime Scene Investigation, Valley Peaks and 90210.

Speaking of lifestyle, she spends money on dwelling stylish designer brands and traveling. Klein is an avid pet lover; she owns a Brown Pitbull dog which costs $2000-$20,000.

Abigail Klein aka Abigail Jordan Klein was born on 24 December 1988 in Dallas, Texas. She started dancing at the age of nine and became a cheerleader for Dallas Cowboys in 2007 after graduating high school.

She is 5 ft 7 inc tall and weighs 55 kg. Abigail has short blonde hair and alluring blue eyes. Walking into hobbies, Abigail prefers to spend her time in the kitchen (cooking varieties of dishes).