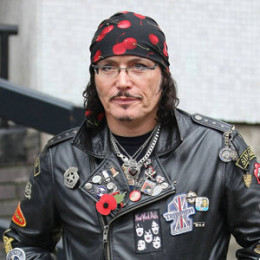 An English musician Adam Ant who is better known as Front-man of the post-punk band Adam and the Ants. his parents divorced when he was just seven years old. He attended Barrow Hill Junior School where he learned boxing and playing cricket. he also studied graphic designing from Hornsey College of Art. He started his career joining band named Bazooka Joe, in which he played bass guitar. During his musical career his songs scored 10 UK top ten hits from 1980 to 1983 and three of songs charted in no.1 position. "Ants Invasion", "Cartrouble", "Physical" are some of his hit songs. Beside singing he has appeared in two dozen films and television episodes like Nomads, Sunset Heat, Love Bites etc. In 1982 he was even nominated for Grammy Awards: Best New Artist.

Talking about his marital status, his married life is a kind of disappointing. He was married twice and both of his marriage ended in divorce. His first marriage with Carol Millis ended after seven years.

During his first marriage, he developed anorexia.

He has no children form his first wife. Secondly, he married a 25-year-old PR assistant Lorraine Gibson. Together they were parents of one daughter Lily Goddard.

Later, the couple got divorced and they are taking join custody of her daughter. Besides marriage, he has also dated a couple of celebrities including actress and singer.

Stuart Leslie Goddard was born on 3 November 1954 in London.

He gained wide popularity being the lead singer of new wave group Adam and the Ants.

after dating a year couple got married. They didn't have any children from their marriage. Irreconcilable difference is cited as the reason behind their divorce.

Couple's marriage was performed in Dayton, Tennessee. Together the couple were parents of on daughter. They divorced after a year of their marriage.

She is the only daughter from Adam's second marriage. She is very adorable kid.