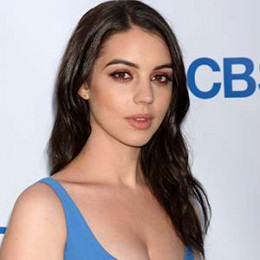 Noble Australian actress, Adelaide Kane has been romantically linked to many big names of the Hollywood industry. After multiple failed affairs, she found the love of her life. Who is that lucky guy?

Teen Wolf actress, Adelaide Kane is currently in an intimate relationship with Joey Pauline, Fashion Brand owner. The lovey-dovey bond between the two consolidated in 2017.

Adelaide has been in relationships with Ian Bohen. They had an affair for a year and parted ways in the fall of 2011. After Kane Bohen dated Haley Webb in 2014.

Before casting as Mary Queen Of Scots in The CW period series, the Purge star kindled a romance with a "Gossip Girl" actor Connor Paolo in 2011 and the couple broke up in 2013. They remained in a girlfriend-boyfriend relationship for two years.

The began dating Sean Teale, English actor and fellow Reign star from 11th November 2014 to 2016. While in a relationship, they shared their romantic moments on Instagram. The lovers met on the set of Reign.

The brunette beauty is also linked with "Reign" co-star Toby Regbo in 2013. Even her love life with Regbo was short-lived.

How Much Is Adelaide Kane's Net Worth?

Unlike others, Kane brings in big bucks from ads and endorsements. She has been actively involved in the entertainment industry since 2006 and still working with it. So, she'll possibly make double amount in upcoming days.

Kane did a part of the long-running Power Rangers franchise from 2009 March to December. Kane starred in Scott Speer's short thriller film Realm in 2015.