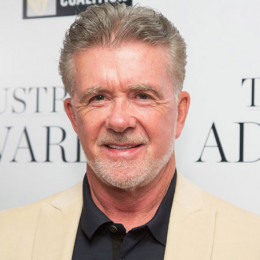 Alan Thicke was a Canadian talk show host, actor, and songwriter. He was well recognized for his portrayal as Jason Seaver in popular series Growing pains. The talented personality is no longer with us as he passed away on December 13, 2016.

Alan Thicke was born on March 1, 1947, as Alan Willis Thicke. He hails from Kirkland Lake, Ontario, Canada. He was the son of Shirley Isobel Marie and William Jeffrey. The surname Thicke was given to him when his mother married Brian Thicke after separating with William.

Thicke attended Elliot Lake Secondary School. He went to the University of Western Ontario and joined the Delta Upsilon fraternity.

Alan was an actor, songwriter, game and talk show host. He began his hosting career working on a Canadian game show First Impressions in the late 1970s. Prior to that, he was a writer for Canadian Broadcasting Corporation. He then became the show host of The Alan Thicke Show followed by Thicke of Night. He also hosted the game shows Pictionary and Three’s a Crowd.

In 1978 Thicke wrote and produced a talk show America 2Night. As a composer, he created the theme songs for shows including The Wheel of Fortune, The Facts of Life and Diff’rent Strokes.

Furthermore, Alan made an appearance in television movies such as The Growing Pains Movie in 2000, Hope & Gloria and Growing Pains: Return of the Seavers in 2004. He played the cameo role in the popular sitcoms like How I Met Your Mother in 2008 and Swim's Tim and Eric Awesome Show, Great Job in 2009.

In 2013 he appeared on the show Wife Swap. In addition, Thicke is the author of two books, How Men Have Babies: The Pregnant Father’s Survival Guide (1999) and How to Raise Kids Who Won’t Hate You (2006).

Thickie had married three times in his life time. He has two sons from his ex-wife Gloria Loring namely Brennan and Robin.  Gloria is an actress of Days of Our Lives. They tied a knot in 1970 whereas divorced in 1984. His son Robin is a popular R&B singer as well as a song writer now.

Alan married for the second time with Gina Marie Tolleson, a former Miss World 1990, on August 13, 1994. They together had a son, his third child Carter William Thicke. Their divorce was finalized on September 29, 1999.

Thickie met his third wife Tanya Callau, a host and model in Miami. They eventually fell in love and married in 2005. Tanya was by his side until his last breath.

Apart from his marital relationship, he dated actress Kristy Swanson in 1986. He got engaged to her in 1988. Kristy was only 19 and he was 42 at that time. However, the duo split up before their relationship converted to formal bond.

Alan faced a painful death at the age of 69. He died on December 13, 2016, due to a rupture of the aorta. He was playing hockey at the time with his son Carter in Burbank California.

As an actor, song writer and talk show host Thicke used to earn a huge amount from his career. He had an estimated amount of $40 million.

Gloria Loring is the ex-wife of the late Alan Thicke. The duo tied the knot in 1970 and eventually divorced in 1984.

Gina Marie Tollerson is second ex-wife of the late Alan Thicke. The duo tied the knot in 1994 and eventually divorced in 1999.

Tanya Callau is the third and last wife of the late Alan Thicke. The duo stayed together until the painful departure of Alan. They married in 2005.

Robin Thicke is the oldest son of the late Alan Thicke from his ex-wife, Gloria Loring. He was born on March 10, 1977.

Brennan Thicke is the second son of the late Alan Thicke from his ex-wife, Gloria Loring. He was born on December 17, 1974.

Carter William Thicke is the youngest son of the late Alan Thicke from his ex-wife, Gina Tolleson. He was born on July 10, 1997.