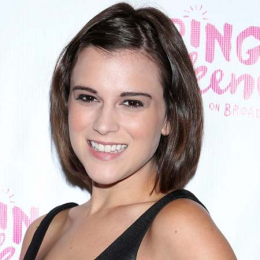 American actress, Alexandra Socha is best known for her works in the stage performances like rock musical 'Spring Awakening', 'Brighton Beach Memories', and 'Head Over Heels'. She is also known for her role on television series like 'The Big C', 'A Gifted Man', 'Blue Bloods', and 'Law & Order: Special Victims Unit'.

Alexandra Socha's Personal Life; Is She Dating a Boyfriend?

Alexandra Socha is dating the famous actor Etai Benson. The duo shares a good bond and is together for several years. Moreover, the pair is open about their relationship and frequently shares their pictures together in their respective social media profiles.

The couple is together for a couple of years, however, how the duo first met is still a mystery. Besides that, the duo frequently goes on vacations together and knows how to separate their time for personal life behind the professional ones. Further, the duo recently visited the Paradise to celebrate Etai's birthday,

Looking at the duo, they are deeply in love and there will be no wonder if the couple takes a next step in the relationship and share the wedding vows soon.

I just would like a boyfriend who doesn't care when all I talk about are television and my friends.

Well, it's pretty clear that they have been dating for no more than four years. In addition, the relationship between the pair seems fluid as there is no sign of break up between them.

What is the Net Worth Alexandra Socha? Know about her Earnings and Salary

Socha started her career in the film industry after appearing in the 2010 short film named Follow Me. Since then, she starred in the films like Emoticon and The Broken Ones. Besides, she is best known as a stage actress who worked in many theater titles like Spring Awakening, Fun Home, Paint Your Wagon and Head Over Heels.

#TBT Just reminiscing. Red Oaks Season 3 Premiere. This was only a year and a half ago, but I feel like I’ve been at least 8 new versions of myself since then. Hello Saturn Return! And RIP to my evenly protruding collarbones. Sometimes I stare at pics of myself like this just to remember what it was like to be symmetrical.

As for Alexandra's television career, she debuted in the 2010 American television series named White Collar. After that, she performed in many series like The Big C, A Gifted Man, Damages, Made in Jersey, and Law & Order: Special Victims Unit. Unit now, she worked with many acting sensations like Christopher Meloni, Mariska Hargitay, and Richard Belzer.