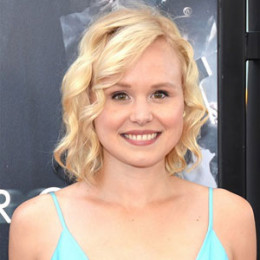 Alison Pill is a Canadian actress, best recognized for her performance in the movies Confessions of a Teenage Drama Queen (2003), Midnight in Paris (2011), etc. She is a former child actress. She debuts in the entertainment arena at the age of 12. Besides, she shares a child with husband, Joshua Leonard.

Alison Pill was born on November 27, 1985, in Toronto, Ontario, Canada. Her father Estonian is a financier. She holds Estonian and Swedish ethnicity whereas nationality wise she is Canadian.

Alison Pill began her acting career at the age of 10, she was the member of Toronto Children's Chorus and chosen to narrate one of their performances. After a year she played the guest role in the episode of kids series The New Ghostwriter Mysteries.

When she was 12, she was offered with two movies and a mini series as well as she voiced a character on an animated series. In 1999, Pill landed her first feature film role, a small budget Canadian movie called The Life Before This.

Get To Know More: Amatus Sami-Karim

In 2016, Pill co-starred with Jessica Chastain in the EuropaCorp thriller Miss Sloane. She joined the series American Horror Story: Cult in 2017.

Alison Pill is a married woman. In January 2015, she engaged to her long term boyfriend, actor Joshua Leonard and the same year they tie a knot in an intimate ceremony.

The duo was blessed with a daughter, Wilder Grace Leonard who was born on November 19, 2016. The duo is together for a long time and shared a good equation.

Prior to marrying Joshua, Pill was engaged to actor Jay Baruchel in 2011. The actor made his engagement public when he thanked Alison at the  Genie Awards in Ottawa, Ontario, Canada as his fiancee.