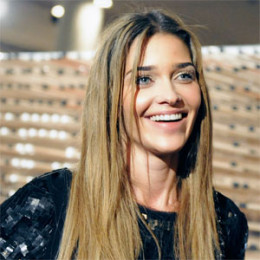 A Brazilian model known for her multiple appearances in the Sports Illustrated Swimsuit Issue as well as work with Intimissimi, Guess, Bebe, Victoria's Secret, Chanel cosmetics, and Jennifer Lopez's JLO fashion line, Ana Beatriz Barros, is currently married to Greek-Egyptian millionaire Karim El Chiaty on the Greek island of Mykonos. The couple married on 8 July 2016. Barros has worked for many magazines some of them are Glamour, Vogue, Marie Claire and so on.

Is Ana Beatriz Barros Married?  Who's Her Husband?

The wedding was a star-studded wedding where models like  Alessandra Ambrosio, Adriana Lima, Isabeli Fontana, and Fernanda Motta were presented.

She posed for a photoshoot with a shiny brown body fit dress on that day. In May, her pregnancy counts three months complete.

Ana Beatriz is running in the third trimester. The Itabira, Minas born model will be giving birth to the couple's second child in between February of this year.

As the baby's due date is nearby, the cupid can't wait to hold their child on their arm. Barros shares the happy news via Instagram in September 2019.

What is Ana Beatriz Barros Net Worth?

Ana Beatriz Barros has an estimated net worth of $15 million which she accumulated from her modeling career and brand endorsements.

She earned a good sum of the amount from the modeling contract and photoshoots.

Ana Beatriz Barros was just 13 years old when she and her elder sister, Patricia Barros were spotted by a representative from Elite Model Management during their vacationing in Rio de Janeiro. In 1996, she was encouraged to participate in the Elite Model Look by the Elite office where she ended in 2nd place.

Barros walked in the Victoria's Secret Fashion Show from 2002 to 2009. She also featured in a number of magazines cover such as Glamour, Vogue, Marie Claire, Audi magazine, W, Elle, Sports Illustrated in the Swimsuit Issue and others.

Ana Beatriz Barros was born Ana Beatriz Barros El Chiaty on May 29, 1982, in Itabira, Minas Gerais, Brazil. She is the youngest daughter of  Sônia Barros, a housewife, and Reinato Barros, a mechanical engineer. She has spent most of her childhood in Rio de Janeiro.

Barros has two sisters, Patricia Barros who is also a model, and Malu (Maria Luisa), a dermatologist. She is of  Portuguese, Italian, Spanish and German descent.

married to Greek-Egyptian millionaire Karim El Chiaty on the Greek island of Mykonos .The couple married on 8 July 2016.