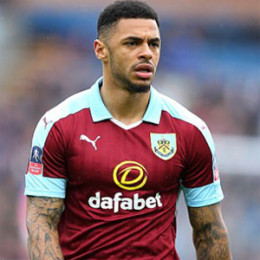 Andre Gray is a British professional football player who is currently playing for Premier League club Watford as a striker. He rose to stardom after scoring 57 goals in 111 appearances in a two seasons spell with Luton Town. He made his senior career debut playing for Shrewsbury Town in 2009. Gray is dating pop singer Leigh-Anne Pinnock, his girlfriend since 2016.

When he was just 13, Gray lost his grandfather, who used to take him to football games. His grandfather also acted as his mentor and was a father figure to his younger step-brother, Cody and him. He revealed in an interview as to how his grandfather inspired him, saying,

"I know what my grandad wants me to do and that's look after my family. It's driving me to work harder"

He holds British nationality and regarding his ethnicity; he is of mixed ethnicity( English and Jamaican).

Andre Gray started his football career in 2004, playing in the academy at hometown club Wolverhampton Wanderers. However, he was released when he was 13. He then went on to join the youth system at League Two club Shrewsbury Town in 2004. The club signed a year contract with him awarding the number 20 shirt.

Gray made his first-team appearance on the opening day of the season, playing as an 89th-minute replacement for Nathan Elder in a 3-1 win over Burton Albion. He then made his final appearance for the club coming as a 57th-minute substitute for Kris Bright in a 2–0 win in the Football League Trophy.

On November 26, 2009, Gray joined Conference North club AFC Telford United on a month loan. He made his first goal for the club against local rivals Stafford Rangers. But, he had to come back to Shrewsbury Town on 5 February 2010, due to his poor performance in the team.

Gray signed to Hinckley United for an emergency one month loan on 5 March 2010. And he then started playing as a part-time player for the team. He helped the team to reach the semi-final of the FA Trophy, defeating Conference Premier club Wrexham in the first round.

Gray scored 37 goals in 85 appearances in his two spells with the club before his departure in summer 2012. Thereafter, he went on to sign for Conference Premier club Luton Town on loan. He became the first player in the club's history to score in four consecutive matches since his debut for the club. He scored goal number five against the champions Fleetwood Town, last game of the season. The 2-0 win also helped Luton to secure fifth place in the league and the last available spot for the play-off. In the first leg play-off semi-final against Wrexham, Grey scored the opening goal. Luton won 3-2 on aggregate to acquire a place in the finals against York City. Though Grey scored an early goal after just 74 seconds, Luton lost the match 2-1. During Gray's loan period, he scored 7 goals in 12 appearances.

Luton signed him a two-year contract for a fee of £30,000 after the play-off final defeat. Throughout his career with Luton Town, he made 111 appearances and scored 57 goals. He joined Championship club Brentford signing a three-year deal for an undisclosed fee, playing as number 19.

Gray scored his first Football League goal in a 2–0 win over Rotherham United, on 30 August 2014. He left the club on August 21, 2015, though his two goals in his first two appearances of the 2015-16 season prompted Brentford to recommend him a new, improved deal.

Gray joined Championship club Burnley on the same day of his departure from his former club. And he signed a three-year contract for an undisclosed fee, but it was assumed to be £6 million. He debuted for the club in a 2-1 win over Bristol City, on August 29, 2015.

Gray scored seven goals in nine matches, including a hat-trick a 4-0 victory over Bristol City which increased his goalscoring tally to 15. He also helped them to reach Championship summit, scoring eight goals in Burnley's remaining matches.

He debuted in Premier League on the opening day of the 2016-17 season in a 1-0 win over Swansea City. After a weak, he scored his first Premier League goal in a 2–0 home defeat to Liverpool.

He is currently playing for the Premier League club, Watford and signed a contract with the team for five years in August 2017.

During the final months of the 2011-2012 season, Gray was selected in the National team, England C’s, playing an International Challenge Trophy match against Russia U23 in June 2012. He scored his first international goal coming as a half-time substitute for Stephen Brogan in a 2-1 victory.

He scored two goals and won six caps during his international career.

Andre Gray is an unmarried and has no children. However, Gray is in a relationship with Leigh-Anne Pinnock, and the pair is still going strong. His girlfriend Pinnock is an active member of one of the popular girl bands, Little Mix.

The couple was spotted together in public places after Pinnock posted a picture of herself and Andre kissing on Instagram. The couple officially began dating in late 2016.

Gray is also a huge supporter of Arsenal football club.

Gray has a four-inch scar on his left cheek due to 2011 gang-related tragic incident. In May 2015, he revealed that he often gives credit to his mother, close friends, and Luton Town for turning his life out of the gang lifestyle.

Net Worth, Salary, and Height

The successful English footballer Andre Gray has earned a huge amount of money from his football career and his estimated net worth is assumed to be in millions, however, the actual figure is not public. He also shares his girlfriend's net worth of £1.2 million.

In 2012, Luton Town signed him a two-year professional contract for a fee of £30,000 ($40000 approx). He joined Championship club Burnley in August 2015, signing a three-year contract, he didn’t disclose the real figure, but it was believed to be £6 million ($8 million approx).

"We are guaranteed to receive a shade over £1.1 million from the fee which will be spread over three seasons; an initial figure approaching £300,000 followed by two of just over £400,000 each"