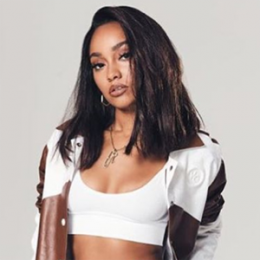 A British singer and a songwriter, Leigh-Anne Pinnock is known as a member of the all-girl band, Little Mix which is one of the popular band in the world. She is a fashion blogger as well. She began her career from the reality show, The X Factor due to which she rose to fame after winning the show together along with the team.

Leigh-Ann Pinnock was born on 4th October 1991 in High Wycombe, the United Kingdom with the birth sign Libra. She was raised by her parents Deborah Thornhill (worked at the Harlington Community School) and John L. Pinnock (a mechanic) along with her two siblings Sarah and Sian-Louise. Her parents were separated in 2006. They filed the divorce in 2009.

Due to her parents’ divorce, she along with the siblings faced some of the problems in their day to day life. Regarding her ethnicity, she has Bajan and Jamaican ancestry and holds a British nationality.

From the very early age, Pinnock was interested in acting so used to participate in different plays in the school. To improve her acting skills, she even joined the Sylvia Young Theater School in London.

Pinnock’s career began after participating in the reality show, The X Factor in the eighth series. She gave an audition for the show in 2011 singing the song, Only Girl by Rihanna. She was selected for the boot camp round and later paired with a group consisting two members.

Unfortunately, the group could not go ahead due to which she was shifted to another group as a second chance with Jade Thirwall, Jesy Nelson, and Perrie Edwards. The group members together then formed a group named, Little Mix which was mentored by Tulisa Contostavlos.

All of the members gave back to back amazing performances that impressed the audiences as well as the judges. As a result, she along with the group became the first ever winner of the British show, The X Factor.

Pinnock’s real journey started after winning the show with the group as they released their debuted album, DNA at the British one-day music event, T4 on the beach. The album became so popular and was even ranked on the UK Singles Music Chart. Within the three weeks of the release, the album reached the third position on the UK Album Charts.

In the year 2013, she gave the world her single, How Ya Doing? featuring Missy Elliot, a Grammy award winner which was ranked in the topmost position on the chart. Moreover, she along with the group became very famous and began to perform in many of the prestigious platforms.

After the success of the first album, they released many of other back to back including Salute, Get Weird, Glory Day and others. All of those became so popular and entered into the UK Album Charts. Among all of these, Get Weird was one of the band’s best album that was even awarded a double platinum and was sold over 600k copies.

Furthermore, giving such an amazing contributions to the music industry, she along with the team were awarded from various awards like Glamour Award twice, Teen’s Award and others.

As of now, the gorgeous lady is in love with her footballer boyfriend, Andre Gray. The couple has been in a relationship for several months. But the couple got separated some months ago due to some misunderstanding but as of 2017 they are back together and living happily. They were even spotted at Manchester’s City Center strolling arm-in-arm and looking cozy together which proved that they were again together after certain months of separation.

Before Gray, Pinnock was dating her ex-boyfriend, Jordan Kiffin (a footballer) in 2013. The couple was happy together and was spotted in many places together. The pair with such a great bonding broke up in 2016 due to some unknown reasons.

Despite the amazing stardom, she was involved in several controversies in her past days. In December 2016, when she was caught making an explicit sex confession during an interview. The band was doing a live stream with Refinery29 as a part of their current promo tour.

Pinnock is currently 26 years old and has the average height of 5 feet 3 inches (1.6m). She after contributing much to the music industry collected an estimated net worth of $1.2 million. She collected much from the music with a group as well as the individual.

Her team’s album was sold in numbers of copies from which they were making a great amount of money. Not only this, during the tour, the band sold 300k tickets and earned more than millions. The group has made a huge income in their career.

The group is not limited to this. They even launched their book, Ready to Fly and also signed a deal with Vivid, a toymaker so that to produced range of products like accessories, games, dolls, and others.

The group has also launched a children clothing line, Primark and became the global brand ambassador for women’s fitness brand, USA pro. These all are the major sources of income of the group.

Besides, she has also opened a Tumblr fashion blog named, Leigh Loves. She is grabbing a genuine amount of money from her successful career.

Pinnock being a successful singer is also a kind-hearted as support and contributed some amount to the foundations like Children In Need and Together for Short Lives.