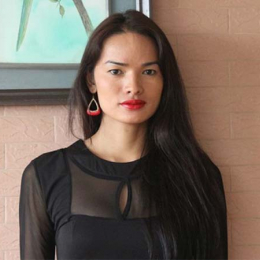 Anjali Lama lies upon one of those transgender models who are praised and loved for their looks and as well as their modeling skills. The 34-years-old model is famous for collaborating with famous brands like Calvin Klein, ELLE India, and The Hindu. She is also recognized for appearing and featuring in the magazines like Elle and L'Officiel, Vogue, Grazia, Harper's Bazaar, and Femina. She grabbed the limelight by ramp walking in the famous brand Lakme Fashion Week in 2017.

Personal Life of Anjali Lama; Is She Dating Someone?

Anjali Lama is currently dating a mysterious boy since her early life. She has kept all the information regarding her boyfriend within herself. Moreover, the duo is together now for over one decade and they are celebrating fourteen years of the dating relationship.

Anjali once joined an interview on the show named The Girl Tribe, where she talked about her relationship, personal life, and professional life. What's more, she said,

"I think I am the luckiest person when it comes to love. I had disclosed my identity in 2005 and since that time, I have a boyfriend. And whatever I decide to do with my body, the love will not change."

Further, she added that parents of her boyfriend are still unaware that he is dating a transgender. She said that she loves to get married someday.

Here she the full video and find out what else she discussed about her personal and professional life;

Besides, being a transgender, she faced many phases of professional obstacles which made her even strong than before.

Her friends constantly teased her during her school days for her "girly behavior" when she was Nabin Waiba Tamang, a little boy in the small village of Nepal.

"As a child, I always fantasized about wearing what girls wear, behave the way they do, be with them and try to be them. The desire never faded, but at that time I had no clue that I was ‘normal’ to feel that way."

Due to the social pressure and rituals, she pressurized herself to be a boy but she was happy from inside with her girly self.

At 17, she moved to Kathmandu, the capital city of Nepal and reached a crossroads that finally brought a drastic change in her life.

"We didn’t have a television but one day we were watching TV in a friend’s home and there was a programme on transgenders that was playing. While others ridiculed the makeup-wearing men who behaved like women, I felt the happiest I’ve ever been. There were more like me."

Yes! it was the moment!

She visited the transgender community in Nepal and from that moment she became unstoppable. She threw her boy clothes, stopped going to her village and finally became who she meant to be.

She is currently living a blissful life as a model and seems happy with her relationship.

What is the Net Worth of Anjali Lama?

Anjali Lama holds an estimated net worth of $20,000, all thanks to her career as a model. In addition, the average salary of a model is $1,160 per year in Nepal besides, it depends upon the popularity of the model and the modeling campaign.

In fact, she was accepted to walk in Lakme Fashion Week in 2017 after getting rejects for the two previous efforts. Notably, she is the first ever transgender model to walk for Lakme Fashion Week. After that, she became famous and went on working with the high profiled designers like Monisha Jaising, Gaurav Gupta, Raw Mango, and Rajesh Pratap Sigh.

The average salary of a Calvin Klein model is about $50,000 a year.

As per Lama's magazine works, she appeared in the many magazine's covers including Elle and L'Officiel. More to that, she was also featured in several magazines like Vogue, Grazia, Harper's Bazaar, and Femina.