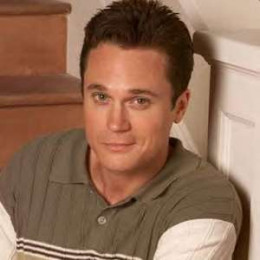 Anthony Starke is an actor. He is well known for portraying Jimmy on Seinfeld. Anthony attended Marquette University. He made his first feature film debut "Nothing in Common" with Jackie Gleason and Tom Hanks, playing the part of Cameron. He also played the role of Dr. Bob Taylor on Baby on Board. He won a screen role playing quadriplegic teenager Dean Conroy in the CBS Movie of the "First Steps". Starke is a married man and he has a son with his wife, Lolly Starke.

Anthony Starke was born on June 6, 1963, in  Syracuse, New York, U.S. She is American and belongs to the White-American ethnicity. her birth sign is Gemini.

Starke attends Marquette University on the Liberace foundation scholarship for performance and he won the screen role in  CBS Movie of the Week, First Steps. He completed his graduation with a B.A, in Theater Arts,

Anthony Starke is active in film fraternity since 1985 but her first feature movie was Nothing in Common which was released in 1986. He got a chance to share the screen with  Jackie Gleason and Tom Hanks.

In 1989, he played the role of Truman-Lodge in the James Bond movie, Licence to Kill. He has worked on several movies and TV series including Return of the Killer Tomatoes, The Magnificent Seven, Charmed,  Make It or Break It,  Baby on Board and many more.

He was also appeared in four episodes of the Disney Channel series, Shake It Up as the boyfriend of Cece's mother.

Anthony Starke, 54 is happily married to his long-time married Lolly Starke. The duo tied the knot in an intimate ceremony in the presence of their closed ones and family members.

The couple was blessed with a child, Garrett. Currently, he is living a blissful married life along with his wife and a son in Los Angeles, California. Starke is a well-trained martial artist.

Anthony Stark estimated net worth is $10 Million, as per some online sources but no official confirmation has come about it.

Besides this, he charged a handsome sum for his appearance in movies and TV series.

He married to Lolly Starke and he enjoying his life very happily with his family so less chance of separation.They have one child.

He is the first child of this couple.He is living his life happily with his parents. His parents is not disclosed his date of birth.