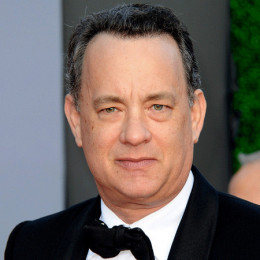 An Legendary American actor and filmmaker who have already won back-to-back Oscars for Philadelphia in 1993 and Forrest Gump in 1994. He is son to Janet Marylyn and Amos Mefford Hanks. In 1960 his parents got divorced and he went to stay with his father. According to him when he was in school he was unpopular among his friends and teacher and he was very horribly, painfully, terribly shy. He attended Chabot College in Hayward. He debuted in film industry from low budget movie He Knows You're Alone. For his work in the movie Saving Private Ryan (1998) he was awarded with Public Service Award. He mostly plays character of ordinary guys. He is ranked in 17th position of "The Top 100 Movie Stars of All Time" by Empire UK magazine.

Having a brief view of his personal life, he is married twice. Initially, Hanks who is diagnosed with Type 2 Diabetes had married his long time girlfriend with whom he has a son and a daughter. But the thing didn't go pretty well as thought and due to some personal reasons, couple got divorced. Later he married his co-star from movie Volunteers. Together the couple is blessed with two sons. Currently he has converted himself to Greek Orthodox Church and have turned into a religious person.

They haven't still disclosed any reason behind their divorce. Together they have one daughter and a son.

They first met each other in 1981 on the set of Bosom Buddies. After dating for three years couple turned their relationship into marriage. Together they are parents of two sons.

He is the eldest child from his first marriage. Following his fathers path he is also an American actor.

She is the youngest daughter from his first marriage. She is pretty and gorgeous.

He is the first child from his second marriage. He had a small role as a student in the movie Indiana Jones.

He is the youngest son of the family. His picture along with family can be found in different sites.