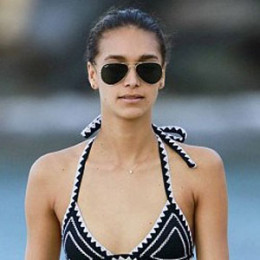 April Love Geary is a Mexican model who works for IMG Worldwide and Photogenics Talent Agencies. She is one of the accomplished models who is famous for her sensual bikini pictures. Currently, she is dating her boyfriend, Robin Thicke with whom she is due to have a baby in 2018.

Born on 6th December 1994, April Love Geary, grew up with her sibling sisters in the United State. She is really close to her mother and enjoys mothers’ day with her every year. She belongs to mixed ethnicity: as her ancestors are from Mexican, Irish, Dutch and French descent.

From her childhood, she was interested in modeling and at the very early age of 12, she started her career as a model. She later signed with IMG Worldwide & Photogenics talent agencies, where she showed off her bikini bod in different photo shoots.

During her journey in IMG Worldwide & Photogenics, she traveled different corner of the world for photo shoots including Hawaii, Malibu, Germany, and China. Also, traveling is the best part that she loves in her life.

Though she has just started her career, she came to limelight after she dated boyfriend, Robin Thicke.

April Love is in love relationship with Robin Thicke, an American singer, songwriter and record producer,  since 2014. The boyfriend-girlfriend started dating after Robin’s separation from his ex-wife, Paula Patton, in October 2014.

The duo first stepped out in public as a couple during the 2015 Cannes Film Festival and before that, they were spotted together at Leonardo DiCaprio’s birthday party in 2014.

The lovebirds have the age difference of 18 years, but she doesn't care about it. During the Valentine's Day, she even shared a photo with the caption for all the people talking about their age difference.

It said,"Robin Thicke & his 'much younger girlfriend' enjoying Napa Valley for Valentine's Day."

The pair has announced that they are expecting a baby girl and her due date is March 1 and the date happens to be the birthday of Thicke's late father, Alan Thicke.

Altogether, April love along with her boyfriend, Robin Thicke, has an estimated net worth of $18 million. She actively participates in her Instagram account where she has over 120k million.