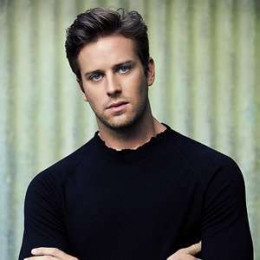 Armie Hammer is an American actor. He was born to father Michael Armand Hammer and mother Dru Ann. His father owns several businesses and television, film, production company. At the age of seven, his family moved to Long Island for five years and then moved back to Los Angeles. Armie joined Faulkner’s Academy and dropped his high school for pursuing an acting career.

Armie Hammer first appeared on stage in Rooster Hannigan production of “Annie". His popular role came when he played the “Winklevoss Twins” in the movie "The Social Network". Armie will be working as Oliver in "Call Me By Your Name", which expected to be released in 2017. He is married to Elizabeth Chambers, an actress, and television personality. Armie has a daughter with Elizabeth.

Armie Hammer started his acting career in 2005. He appeared in number of TV series including  Veronica Mars, Gossip Girl, Reaper and Desperate Housewives and others.

In 2015, he starred in The Man from U.N.C.L.E. starring Henry Cavill, Alicia Vikander, Elizabeth Debicki and others.

Armie Hammer is married to wife,  Elizabeth Chambers on May 22, 2010. The duo shares two children.

Armie Hammer has an estimated net worth of $16 million.

Elizabeth Chambers is an American actress and a television personality. They are still married and have a daughter together.

Elizabeth gave birth to her first daughter at age 32 on December 1, who was delivered by Dr. Jay Goldberg. She looks cute in the available pictures.