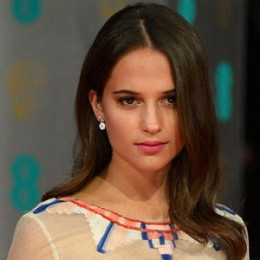 Amanda Alicia Vikander is a Swedish actress who came into world recognition after the period drama ‘A Royal Affair’ as it was nominated for Oscar. She was born in Gothenburg to the mother, Fahl Vikander, an actress and a psychiatrist father, Svante Vikander. She has five siblings. She had attended the training classes in dance from the Royal Swedish Ballet School in Stockholm for nine years.

She is not married to date. There are no official or confirmed information available on her dating or boyfriends. However, based on the hookup and pictures, she is rumored to have in an affair with two guys till date, Alexander Skarsgard and Michael Fassbender.

The rumor with Alexander Skarsgard was since 2012 and recently with Michael Fassbender. The couple met on the set of The Light Between Oceans.

Vikander and Fassbender tied the knot on 14 October 2017 in an intimate ceremony in Ibiza. The pair currently resides in Lisbon, Portugal.

Alicia Vikander was born 3 October 1988 in Gothenburg, Sweden. She is best known for playing Kitty in Joe Wright's adaptation of Anna Karenina and Queen Caroline Mathilde in the Danish film A Royal Affair.