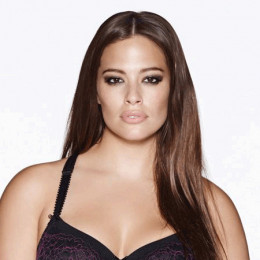 An American hot and sexy model Ashley Graham who is widely known as a lingerie model for the plus-sized clothing store named Lane Bryant. She attended Lincoln Southwest High School. When she was just 12 years old she was discovered by I & I agency while she was shopping at Oak View Mall, Omaha. After attending model convention in 200 she was signed by Wilhelmina Models. She has already done modelling for popular companies and magazines like Ford Models, Elle Quebec, Vogue, Harper's Bazaar, Glamour etc. She was also featured in editorial for Bust in December 2010. Beside modelling she has also designed a lingerie line for Addition Elle which is a Canadian plus-size clothing retailer. She has also made guest appearance in popular shows like Entertainment Tonight and CBS News.

Talking about her personal life, the beautiful model already tied in the knot with her longtime boyfriend Justin Ervin who is a videographer. They seem to be very happy with each other.

I miss youuuuuu! We took this pic before we were engaged nine years ago. You are my favorite person in the whole world- can’t wait to squeeze you!!

Beside this marriage there has been no report of her dating anyone. Till now, no complication has arisen in their marriage relationship.

Since they are maintaining a very healthy relationship, there is no question of getting a divorce. She has not been a biological mother yet.

Ashley Graham was born on 30 October 1987. She was diagnosed with dyslexia and ADHD in childhood.

She appeared on the cover of fashion magazines like Glamour, Elle, and Harper's Bazaar.

She is going retro for her recent Resort 2019 collection for Swimsuits For All.

Previously, she created headlines when she used unretouched and unedited pictures of her (taken from paparazzi). She called the campaign "Power of Paparazzi".

Professionally, he is a videographer at church. They first met each other at 2009. After their first meeting they started dating and finally got married a year later.