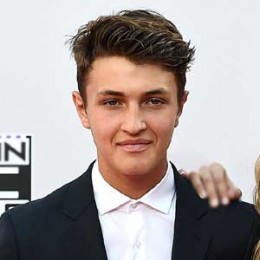 Anwar Hadid is an American model and TV personality. He has starred in the cover page the popular magazine, Teen Vogue. He was named the face of Hugo Boss in 2017. He made career debut in 2015.

Born on 22nd July 1999, California, U.S. Anwar Hadid is the son of Mohamed Anwar Hadid and Yolanda Hadid. He is an American and belongs to the mixed ethnicity. His mother is a Dutch-American television personality, and former model. His father is a Jordanian-American real estate developer of Palestinian origin.

Hadid is a younger brother of Gigi Hadid and Bella Hadid. He also has two half-sisters from his father’s previous marriage. They grew up together in the city of Santa Barbara. His parents were divorced in 2000.

Later, Hadid along with his family moved to Malibu where he joined the Malibu High School. He was also the part of the soccer team. Moreover, he loves swimming, surfing and playing basketball.

Hadid started modeling career at the age of 16. He signed for Nylon Magazine in October 2015. The following year in June/July, he was on the cover of Teen Vogue, A US-based magazine, along with Cameron Dallas.

Moreover, Hadid walked in the Zadig & Voltaire New York Fashion Week in February 2017. It is one of the major fashion weeks in the world held in Paris, London, and Milan.

Hadid, age, 18, is unmarried and has no children yet. Standing 6’1” tall, he is one of the sensational models of America. He follows the Islam religion. His elder sister, Gigi Hadid is a fashion model whereas his elder sister, Bella Hadid is an actress.

Hadid was in a relationship with Nicola Peltz, an American actress. His ex-girlfriend, Nicola is better known for her appearance in the music video titled 7 Things by Miley Cyrus. The couple has been together for a long time. They were spotted together while shopping in Beverly Hills.

I swear im nice it was just mad sunny

Bella's friend Kendall Jenner was spotted kissing Anwar on the cheek at the Harper's Bazaar ICONS party in September 2018. Further, the two shared at the ICONS event. Also, they packed on more PDA at another Fashion Week event.

"Kendall was sitting with Anwar all night and made out with him for quite some time. They didn’t give a damn who saw them."

Further, they out earlier in 2018 at the Malibu Chili Cook-Off Fair with a group of friends. The insider said,

"Kendall seems great. She’s spending time with Anwar. She obviously likes him, but both nights they were with a group of friends. She wasn’t affectionate with Anwar."

Photos of the two went viral making out with friends after the CFDA Awards in New York. They are yet to confirm their relationship in public.

Anwar is one of the successful models, but there is no exact figure regarding his net worth. He currently resides in the city of Los Angeles.

His net worth and current salary is still under review.