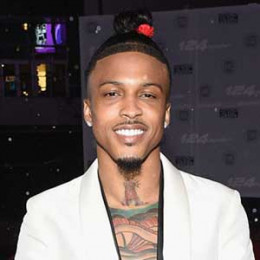 An American recording artist, August Alsina is well known from his single, I Luv This Shit featuring Trinidad James. He started his musical career at the age of 14 after uploading several videos on YouTube including a cover of Hypothetically by Lyfe Jennings. His most famous albums are- Downtown: Life Under The Gun and Testimony and This Thing Called Life that helped him to gain much of the name and fame.

Born as August Anthony Alsina, Jr. on 3rd September 1992 in New Orleans, Louisiana is one of most famous recording artist. His father and step-father both were battling with crack cocaine addiction. So her mother moved to Houston, Texas after the natural disaster, Hurricane Katrina to start a new life. August's father died.

August grew up in a low-income family along with his two brothers, Travis and Jamal. He attended a middle school in New Orleans. On 31st August 2010 his brother, Melvin La'Branch III was shot and killed. He had some disagreement with his mom and was kicked out by his mom.

August Alsina was interested in music right from his early age. When he was 14, he uploaded videos on YouTube, a cover of Hypothetically by Life Jennings. He developed more interest in music after the death of his brother, Melvin La'Branch III.

Alsina debuted from a mixtape six acoustic cover named, Untitled in 2011 and released another mixtape titled, The Product in 2012. He gained much of the fame from his single, I Luv This Shit featuring Trinidad James which released in 2013.  In the same year, he released his EP Downtown: Life Under the Gun and in the next year released Make It Home featuring Jeezy.

Moreover, in 2015 his second studio album, This Thing Called Life was released and was listed number 14 on the Billboard 200 with 41000 copies sales in the first week only in the United States. Hip Hop, Why I Do It (featuring Lil Wayne), Song Cry, Dreamer and Been Around the World (featuring Chris Brown) are the five singles that concluded the album.

Alsina is dating model, Miracle Watts since 2015. The couple maybe wants to stay away from all the rumors. Till now no rumors about their breakup has surfaced so they might still be together.

August has an estimated net worth of $4 million. Alsina owns a luxurious house in New York City with a backyard and a beautiful pool. He also owns a magnificent mansion worth $13 million. August drives a Range Rover.