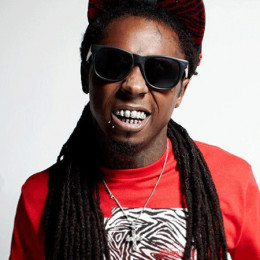 Dwayne Michael Carter, Jr. is widely known as Lil Wayne, is an American rapper, singer, songwriter and record producer. He joined Cash Money Records at the age of 9 and became the youngest member of the label. He is the founder and the CEO of his own label imprint, "Young Money Entertainment", since 2005.

Lil Wayne, an American rapper has dated a number of ladies in his past days while chasing her career. The 37-year-old is a father to four children from his romantic affairs with his exes. So, what is his current relationship status?

Who is Lil Wayne dating at present?

The 37-year-old rapper, Lil Wayne is currently in a lovey-dovey relationship with his girlfriend turned to a spouse, La'Tecia Thomas. They have been kindling romance for a while now and are engaged in October 2019.

The certified makeup artist and plus-size model showed off her dazzling diamond ring on 23rd October 2019 via Instagram post.  Additionally, Wayne and his partner made their first red carpet appearance in February 2020 to celebrate the launch of Lil's new album Funeral.

Oddly enough, Lil Wayne optionally makes an appearance on her socials as they prefer to keep the relationship hush-hush. The lovebirds are soon planning to walk down the aisle too.

Lil Wayne's first marriage was to his high school girlfriend Antonia "Toya" Carter Toya Johnson. She welcomed their first child, Reginae when he was 16 on November 29,1998, before their wedding.

After waiting for years, the couple walked down the aisle on the special occasion of Valentine's Day 2004 and divorced after two years of living together.

Later then, the singer got romantically linked to radio broadcaster Sarah Vivan in 2008. Wayne's second child, Dwayne II was welcomed by him on October 22 October 2008.

On 9 September 2009, the Funeral singer became the father of a child for the third time, the musician welcomed baby no.3 Cameron Carter with actress Lauren London.

In November 2009, Wayne broke up with Lauren for a singer, Nivea with whom he fathered fourth child Neal on 30 November 2009. Furthermore, he impregnated a lady, Trina in early 2010, unfortunately, she suffered a miscarriage.

He was rumored to be dating singer Christina Milian when they attended the ESPY Awards together. They confirmed their relationship in July-2015 but broke up the same year citing irreconcilable differences.

How Much Is Lil Wayne's Net Worth?

Lil Wayne has an estimated net worth of about $120 million at present. He has sold more than 100 million records across the world that includes over 15 million albums and 37 million digital tracks in the U.S. He is one of the best-selling artists of all time.

Lil Wayne doesn't just build a real estate empire and add millions of dollars to her wealth but also give away some portion of earnings to help needy children. is actively involved in philanthropic works like charities. He runs a nonprofit One Family Foundation.

On February 19, 2009, Wayne and Cortez revisited their alma mater McMain School to let students design an invitation to the gala introducing Wayne's foundation.

Wayne collaborated with rappers Juvenile, B.G., and Turk and joined the Hot Boys. The group made a debut with Guerrilla Warfare which peaked at no. 1 on the Billboard Top R&B/Hip-Hop Albums chart.

His solo album The Block Is Hot received a platinum certification by the Recording Industry Association of America (RIAA). Following the success of his debut album, he got wide success in Lights Out, 500 Degreez, and Tha Carter. In 2005, he released Tha Carter II and Tha Carter III in 2008.

Tha Carter III won the Grammy Award for Best Rap Album. Following the huge success of his sixth album, he released Rebirth in 2010. His 12th studio album, The Carter V was delayed multiple times and was finally released on 27 September 2018.

Lil Wayne was born on 27 September 1982 in New Orleans to the parents Jacida Carter, a cook and his father Dwayne Michael Turner. The rapper had a troublesome childhood as his parents divorced when he was 2 years of age. He studied at the Marion Abramson Senior High School. He wrote his first song when he was eight.

He wrote a memoir 'Gone Til' November: A Journal of Rikers Island on 11 October 2016. The book is based on his experience in Rikers Island.

She is an American reality television personality, author and businesswoman. The couple knew each other since 1996.

She is the first child of Wayne and his then wife. Her images can be viewed on the internet easily.

He was born safe at The Christ Hospital in Cincinnati.

She was born safe and healthy. Her images can be viewed on the internet easily.

He is the fourth child of Wayne, who was born healthy.