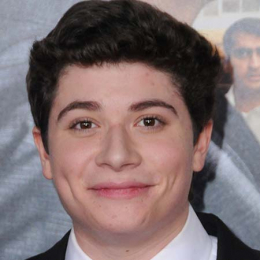 Hollywood personality, Austin Zajur is an actor who grabbed the attention of many viewers by his role in the movie Delinquent as Caster. He recently completed working in 2019 horror film named Scary Stories to Tell in the Dark.

Personal Life of Austin Zajur; Is he Dating?

Austin Zajur is possibly single as of now. The well-known actor is focused on his career and shares no time for dating relationships. Moreover, he is never spotted with any girl outside of the reel life.

Here you can see the post the shared on Valentine's day explaining his single life;

The 23-year-old actress is out of any dating rumors and media controversies. Further, he is waiting for the love of his life and is busy working in many acting projects. Additionally,  he is an active person on social media and shares many posts from time to time.

How much is the Net Worth of Austin Zajur? Know about his Salary, Earnings

Austin started his acting career by working in the 2016 film named Delinquent as Carter. Since then, he worked in a number of films including Fist Fight. Besides, he recently worked in the upcoming Canadian-American horror film named Scary Stories to Tell in the Dark which is made up with the budget of $40 million. meanwhile, he appeared in many television shows and mini-series like John Adams, The Carrie Dairies, TURN, and Mercy Street.

Red Bull gave me wings... But I finished it before clearing the freeway

Until now, the actor worked with many stars like Dean Norris, Natalie Ganzhorn, Charlie Day, and many more. Among all his films, Fist Fight was a blockbuster which earned a total of $41.1 million on the box office against the budget of $22-$25 million.

Austin Zajur was born on August 12, 1995, in the United States under the star sign of Leo. He holds American nationality. Further, his father was born in Zacatecas, Mexico to the parents of Lebanese-Syrian descent and mother is from Virginia and is of English, Irish, and Scottish ancestry.