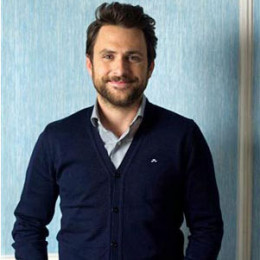 Charles Peckham Day is an American actor, comedian, musician, and screenwriter. He is well recognized for his portrayal as Charlie Kelly on 'It's Always Sunny in Philadelphia.'

Charlie Day was born on 9 Feb 1976, in New York City, U.S. Day's father, Dr. Thomas Charles Day is a former professor of music history at Salve Regina University and mother, Mary was a piano teacher at The Pennfield School.

He spent most of his childhood in Middletown, Rhode Island. Day joined Pennfield School and later attended Portsmouth Abbey School, both of the schools are in Portsmouth Rhode Island.

At Portsmouth Abbey School, he played baseball as a shortstop for the Ravens. In 1998, Day achieved a bachelor's degree from Merrimack College in North Andover, Massachusetts.

While at Merrimack, Charlie was active in the Onstagers, Merrimack's student theater organization. Day also played varsity baseball for the Warriors. In his college years, he was very effective in training programs at the Williamstown Theatre Festival in Williamstown Massachusetts.

Charlie has also received an honorary doctorate in performing arts from Merrimack in 2014.

Charlie Day makes a good amount of money as an actor, producer, musician, comedian, and screenwriter, as he has portrayed in numerous movies, produced, and written too. Some of his popular credits include Mary and Rhoda, Bad Company, It's Always Sunny in Philadelphia. His net worth is around $25 million as of 2019.

As one of his show, It's Always Sunny in Philadelphia is one of the most rated series; currently, the show's budget is $ 1.5 million, whereas previously it was around $800,000.

In 2014, Day and Ellis bought a house worth six and a half million dollars in the celeb-saturated foothill of Los Feliz in Los Angeles, listing their old home for $799,000.

Their old house includes two bathrooms, 3-bedrooms, and 1,467 square feet. Whereas, their new house consists of 5,610 square foot, with six bathrooms and five bedrooms, with a three-quarter acre city view.

Besides his appearance as Charlie Kelly on the FV Television series It's Always Sunny in Philadelphia, Day is also one of the writers and executive producers, along with Glenn Howerton, and Rob McElhenney.

He also improvised and wrote some of the music featured in Its Always Sunny in Philadelphia. Besides, he has appeared on various television shows such as Reno 911!, Law & Order, and Third Watch.

Apart from acting, he has produced television shows like Unsupervised, and How to Be a Gentleman. The day even hosted the 5th November 2011 episode of Saturday Night Live with Maroon 5 as the musical guest which made him the second cast member from Its Always Sunny in Philadelphia to host SNL.

Charlie Day married Mary Elizabeth Ellis on 4th March 2006. He met his wife for the first time in 2001, and began dating since 2004 when they both co-featured as incestuous siblings on Reno 911!. Ellis has also featured on Its Always Sunny in Philadelphia as a waitress.

Since their marriage, the couple has a son together, Russell Wallace Day (born in 2011). He is living a happy life with his wife and a son.

Mary Elizabeth Ellis and Charlie Day first met in 2001 and started seeing each other in 2004 while both co-starred in the series Reno 911! After few years of dating the lovebirds exchanged vows in 2006.

Russell Wallace Day is the only child of Charlie Day and Mary Elizabeth.