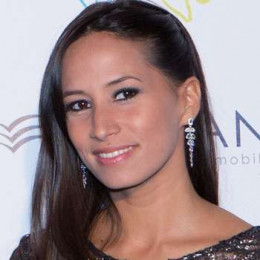 Axelle Francine is a well-known French reporter. She is best as the wife of a basketball player, Tony Parker. The duo is together since 2014.

A little information about Francine is known. She belongs to mixed ethnicity; English and French. She is French Nationality.

She earned a Master's Degree in the field of Journalism and Communication.

Before shifting to the United States, she worked as an underground journalist and reporter. She covered a number of issues in her home country.

She appeared as a guest in the TV show Jimmy Kimmel Live in 2014 with her husband. She was listed in the Men's Journal top ten for the most beautiful WAGS of NBA stars.

Details about her current Net Worth is still under review. Her husband has an estimated net worth of about $75 million with an annual salary of about $12.5 million.

Francine is living a blissful married life with her husband Tony Parker. He is a French professional basketball player for the Charlotte Hornets.

The couple started dating in 2011. Sources reported that the couple got engaged in June 2013. They tied the knot on 2 August 2014.

The couple is blessed with two sons Josh Parker in April 2014 and Liam Parker in July 2016.

Tony Parker, the ex-husband of the beauty Eva Longoria, is the husband of Axelle as of now. They have a son together.

Josh is the first son of Axelle and Tony.