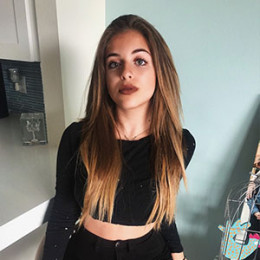 American singer and actress Ariel Rebecca Martin aka 'Baby Ariel' has a wide social media influence. She gained her stardom via videos on TikTok.

She is known as one of the most influential people on the Internet. Also, Forbes included her in the list of top entertainment influencers in 2017.

Baby Ariel's Personal Life: Is She Dating A Boyfriend?

Social media personality Ariel Rebecca Martin aka 'Baby Ariel' is currently dating her boyfriend and the guy is none other than Daniel Skye.

Skye frequently appears on YouTube videos with Ariel and the two look perfect together. On 13th February 2018, he posted a Twitter image stating that Ariel accepted his love proposal.

Moreover, Ariel posts images and videos with her beau on Instagram.

After breaking up with Clayton, she romanced with a new beau, Blake Gray in December 2016. The lovebirds celebrated 5 months anniversary of their relationship in the best way.

Unfortunately, the social media stars broke up after eight months of dating on 2 July 2017. Gray confirmed the split via a Twitter post. He wrote,

"I’m not the same person that I was 8 months ago. Ariel and I decided to take a break from each other for right now. We’re still gonna be really close. Gonna miss you."

"Most of y’alls idols aren’t what y’all think they are. I’m not talking about Ariel btw. She is hands down the nicest girl I have ever met. And she’s one of the few that are real and not fake. Fame changes people. I think fame changed me. & I’m working on that. I know I’m not in my best place now but in the future, I will be. Night."

"I will always love and care about him."

Ariel is with her new boyfriend and it's almost a year since the new couple is together.

Baby Ariel's  Net Worth and Career

Ariel amassed an attractive net worth of about $6 million as of 2019; all thanks to her career as a singer and actress.

She is best known for her videos on Tik Tok (Musical.ly). Times magazine recognized her as one of the most influential people on the internet. In addition, she is featured in the list of top entertainment influencers on Forbes' 2017 list.

Ariel changed her home in July 2018. She gave her new home tour to her fans via Instagram live.

She has a younger brother named King Jacob who also gained wide popularity on TikTok.

As per some reports, she has the third largest following on social media with more than 29 million fans subscribing her clips. Ariel who managed such a massive influence on the internet said it as 'a way to show your passion and your way of expressing yourself to other people'.