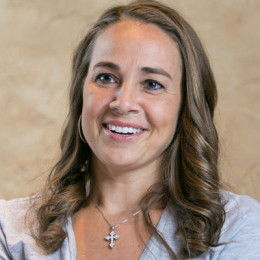 Rebecca Lynn Hammon aka Becky is an assistant coach of San Antonio Spurs of the National Basketball Association. She is also a retired professional basketball player.

Becky Hammon was born on 11 March 1977 in Rapid City, South Dakota to the family of Martin Hammon and Bev Hammon. She has citizenships of the United States and Russia. She has a brother Matt Hammon and a sister Gina Hammon.

When Becky was 17 years old she had played high school basketball at Stevens High School in her home town. She was had been voted as a female class athlete by her graduating class.

Hammon attended Stevens High School in her hometown of Rapid City and played basketball. As a junior, she was widely known as  South Dakota Miss Basketball.

The star, later, attended the University of Utah. She won the Women's Basketball Coaches Association and the Frances Pomeroy Naismith Award in 1999 being the best senior player.

Hammon, 41, signed to the WNBA and became the part of the New York Liberty in May 1999. She only played two games with Colorado Hill because of an anterior cruciate ligament injury in her right knee.

She was in the team representing the United States in the 1998 William Jones Cup winning all five games.

After becoming Russian citizenship in 2008, she joined CSKA team. Her salary in CSKA tripled. People criticized her decision to play in international games representing Russia but she never took a second decision. 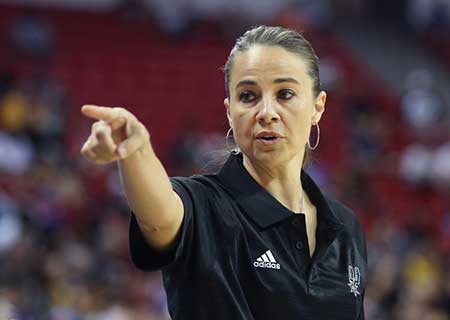 Beck Hammon one of the most qualified NBA head coach.

Further, she represented Russia at EuroBasket in 2009, the World Championship in 2010, and the Olympics in 2012.

She was traded to the Silver Stars in April 2007 during the WNBA Draft. She was inducted into the Ring of Honor in the halftime of the game between the New York Liberty and the Seattle Storm in August 2015. She retired from Hammon's No. 25 jersey before the Atlanta Dream game in June 2016.

Get To Know More: Travis Kelce

Hammon became the first woman to be part of an All-Star coaching staff at the 2016 NBA All-Star Game.

Detroit Pistons, an American basketball team considered her to become its next head coach in May 2018.

In 2007, CSKA became the winner of World League Championship and named to All WNBA 1st Team.

She is a silver medalist in the Russian League Championships in 2008. It was the same years she was declared 'Athlete of the Year' by the Rapid Journal.

On 22 August 2014, she won the Kim Perrot Sportsmanship Award and became ESPNW Woman of the Year.

Hammon has an estimated net worth of about $500 thousand at present.

She made about $95,000 a year at CSKA in 2007. The Russian team also offered her a four-year deal worth around 2 million dollars.

Hammon is completely secretive when it comes to her personal life. She was rumored to be in a relationship with many but it was never confirmed.

Though her dating life is maintained under the radar, she spends much time with her brother and nephew. She posted an Instagram video of the three swimming with the whale shark back in 2016.

The player is moreover rumored to be lesbian and is speculated to be in a relationship with Brenda Milano. They, however, never confirmed the rumor.

She was married to a French Journalist named Axelle francine in a San Antonio ceremony . But because of her husband cheated on her and had relationship with an actress. And later on the couple got divorced.

She was married to a French Journalist named Axelle francine in a San Antonio ceremony . But because of her husband cheated on her and had relationship with an actress. And later on the couple got divorced.

The couple has a son. He is their first child. His name is Josh Hammon.