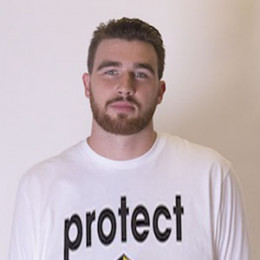 Travis Kelce is an American football tight end for the Kansas City Chiefs of the National Football League (NFL), who signed a five-year contract extension worth $46 million on 29th January 2016. Travis ranked 91st on the NFL Top 100 Players of 2016.

Travis Kelce was born on 5 October 1989 in Westlake, Ohio to the family of Ed Kelce and Donna Kelce.

He was a three-year letter winner at quarterback for the Tigers. He was recognized with All-Lake Erie League honors for making 2,539 yards of total offense as a senior.

He accepted a scholarship offered by the University of Cincinnati. He joined his brother Jason Kelce who is a center for the Philadelphia Eagles.

Kelce was drafted by the Kansas City Chiefs in the 2013 NFL Draft. The Chiefs hired him with $3.12 million rookie contract for four years. He recorded his first professional touchdown on a 20-yard reception from quarterback Alex Smith against Miami Dolphins.

He was fined $11,025 for his misconduct during the 29-16 loss to the Denver Broncos. In addition, he made an unprofessional hand gesture at the Broncos linebacker Von Miller. 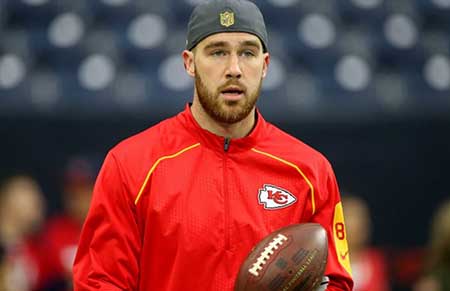 He initiated his first career multiple touchdown games against Houston in 2015. In January 2016, he signed a five-year extension contract of $46 million. He came at 91st position on the NFL Top 100 Players of 2016.

He joined a new quarterback in Patrick Mahomes in the 2018 season.

Five months after breaking up with girlfriend Maya Benberry, Kelce dated gorgeous lady named Kayla Nicole. While attending the wedding ceremony of his teammate Jeremy Maclin, he posted an Instagram image with the gorgeous model.

The couple has been going so strong in their relationship for more than a year.

My lil baby turned another year older this month! The future is gonna bring you so many amazing things, I can’t wait to see you blossom! And for the times life gets a little out of control just know I gotchu in my arms making sure you’re always good!!