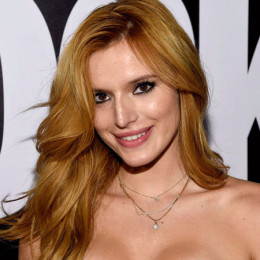 An American actress, singer, and model who is widely popular for her Imagen and Young Artist Award-winning role as dancer CeCe Jones on Disney's Shake It Up. She is also well known as Ruthy Spivey in the TV series "My Own Worst Enemy" among her fans. She is daughter to Tamara and Delancey Reinaldo "Rey" Thorne. She started her career at very young age as child model. Her first appearance in big screen was in the 2003 film Stuck on You. She has made guest appearance in HBO's Big Love and the Wizards of Waverly Place. She has also played the role of Hilary in the 2014 film Blended. She has been awarded with Young Artist Award for her best performance in the TV series "My Own Worst Enemy".

Exploring her personal life she has not married yet. Currently, she is off the market. She is in a relationship with her actor boyfriend. Together the couple seems to be very perfect for each other. They have been spotted shopping together in different occasion. Maybe they are planning to take their relationship in next level i.e. getting engaged. Prior to being in a relationship with him, she has dated more than half a dozen handsome boys.

Bella Thorne started her acting career as a child artist and her first film was 2003 movie, Stuck on You. She rose to fame after starring in the Disney Channel sitcom Shake It Up, originally titled Dance, Dance Chicago.

Some of her notable screen credit includes; Watch Me, Frenemies, Blended, The DUFF, Mostly Ghostly, Shovel Buddies, Keep Watching, Famous in Lobe and others. In her 15 years long acting career, she worked with several actors including, Zendaya, Eva Mendes and Bill Paxton.

Bella Thorne has an estimated net worth of $2 million. She stands at a height of 5 feet 6 inches tall.

Bella Thorne is bisexual which she confirmed in August 2016. She was dating internet personality Tana Mongeau and late rapper Lil Peep.

Earlier in 2018, she admitted having 19 cats with her, explained how she started smoking weed and dating two people at the same time.

Thorne is currently dating both Tana Mongeau and boyfriend Mod Son. She made the things clear during an interview with Amy Kaufman of the Los Angeles Times.

Her girlfriend, Mongeau, 20, is a YouTube icon while her boyfriend, Sun, 31, is a hippy hop star.

"When I was 16, my boyfriend smoked weed and I would get so upset. I thought it was the devil’s lettuce. I was always the really good two-shoes — the one that was the teacher’s pet in that annoying sense."

She revealed that she was sexually abused from the age of 6 to 14 via Instagram post. An old man used to abuse her in her home.

"I used to think of myself like Marilyn Monroe a little bit. Everyone thought Marilyn Monroe was this sex symbol and she was always perfect and beautiful, but she was dying on the inside. I go back to that tweet, and maybe, in some [messed] up way, it’s right. Maybe I am this way because I was molested and raped when I was younger."

Recently, she attending the opening of club On The Record at the Park MGM in Las Vegas with her boyfriend and sister, Dani on 19th January 2019.