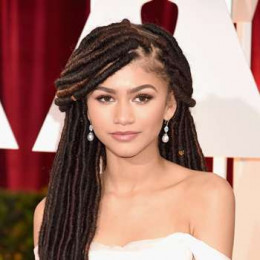 Zendaya Maree Stoermer Coleman, mostly knwon as Zendaya is an American actress, singer, dancer and a model. She is the daughter of Kazembe Ajamu Coleman and Claire Stoermer. Zendaya started her career as a fashion model for stores, such as Macy's, Old Navy, Sears, and Mervyn's. She is now working on the Disney series, Shake It Up. She attended Oakland School for the Arts but had to leave her studies when she got the role of "Rocky Blue" on Shake It Up in 2010.

Zendaya Coleman was born on September 1, 1996, in Oakland, California, U.S. She is the only child of  Claire Marie (Stoermer) and Kazembe Ajamu.

Zendaya started her career as a fashion model for Macy's, Mervyns and Old Navy.

Then this happened, me and my family proceeded to pull over and take a lot of pictures

She started her career in music in 2011 releasing the singles "Watch Me" and "Swag It Out".

She became a Lancome spokesmodel in 2019 while she signed with Tommy Hilfiger (company) and became the brand's new global woman's ambassador in October 2018.

The American actress, singer and dancer has an estimated net worth of about $5 million as of 2019.

She purchased her first mansion, a Mediterranean style, 4,155-square foot property in Northridge, Calif for $1.4 million in 2017 in Los Angeles, California.

Zendaya is in a relationship with Spider-Man: Homecoming co-star Tom Holland. Fans had been speculating about their relationship for months but they kept everything low-key.

Me, myself and the birthday girl. Happy birthday mate - keep killing it and paving the way for the rest of us

In 2015 Zendaya was rumored to be dating Zayn Malik. Further, she shuts down the rumor by reacting to the news to be false. Likewise, in 2021, Zendaya and Holland were caught kissing inside a car and later attended a friend's wedding together looking cozy.