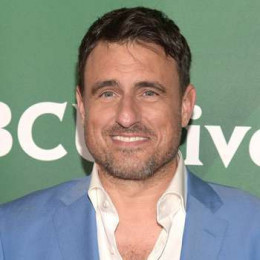 Benjamin Koldyke, better known as 'Ben Koldyke', is a director and actor who is noted for his portrayal in 'Mr. Robinson' for NBC. In 1991, he graduated from Dartmouth College, earning a bachelor's degree in English and made his film debut in 2000 in the role of Kelly's Boyfriend in 'The Next Big Thing'. He is the son of Martin J. Koldyke, a former investment banker, and Patricia Blunt Koldyke.

Moving on to Benjamin Koldyke's personal life, he now is a married man. He recently got married to his long time dated girlfriend Maggie Lawson on 8 August 2015.

Till now he has been married only once but might have dated a long list of ladies in his past days but he has stayed in low profile in this regard. He is very reluctant about revealing his personal information to the public. There is no record of his children till date.

Benjamin Koldyke was born on 27 March 1968 in Chicago. He starred in Mr. Robinson for NBC.

He appeared on the big screen in 2016 in The Finest Hours alongside Eric Bana, Ben Foster and Chris Pine.

An American actress, Lawson is the beloved wife of Koldyke, whom he married amidst a ceremony at his family's ranch in Las Vegas, New Mexico.