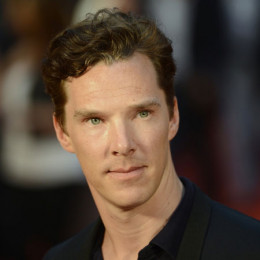 An English actor and producer who is better known for starring as Sherlock Holmes on the British crime drama series Sherlock. In 2014, he received Academy Award nomination for his outstanding role of Alan Turing in the movie named The Imitation Game.

Benedict Cumberbatch is happily married to his wife, Sophie Hunter in 2015 in an intimate yet lavishing ceremony. The couple shares two children; two sons, Christopher Carlton (b. 2015) and Hal Auden (b. 2017).

He was all over headlines in 2005 after he along with his two friends were abducted overnight and held at gunpoint by a group of locals.

Benedict Cumberbatch holds an impressive net worth of $30 million from his career as an actor.

Benedict Cumberbatch was born on 19 July 1976 in London, England to Timothy Carlton and Wanda Ventham.

After completing his graduation, he spends a year teaching English at a Tibetan monastery in Darjeeling, India. He studied drama from the University of Manchester.

Cumberbatch started his career in 2001 by starring in the lead role in various plays that was organized in Royal National Theaters, Regent's Park Open Air, Almeida and Royal Court. For his supporting role in play Hedda Gabler, he was nominated for Olivier Award. In the 2007 film Atonement, he was seen in the supporting role alongside Keira Knightley.

Professionally she is a theatre and opera director. After dating a year they got engaged and their engagement was announced on "Forthcoming Marriages" section of The Times on 2014 march. Together they are parents of a son.

He is the only child of the family. He is very adorable kid.