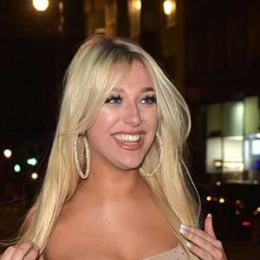 The British reality star, Bethan Kershaw came to fame after starring in the most popular MTV show, Geordie Shore. The show follows the daily lives of housemates.

Bethan Kershaw shares a romantic relationship with her boyfriend, Beau Brennan. Let's find out more about this love bird,

The love life of Betan Kershaw with her Boyfriend

Kershaw started dating Beau Brennan after filming together for the reality show, Geordie Shore. Their love story began in the show and even they had some serious chat about their dating life outside the house in the last episode of 19th season.

He’s out his head, I’m out my mind we’ve got that love the crazy kind 💫

Unlike other couples, Kershaw and her boyfriend succeed to maintain their relationship outside the show. Moreover, the pair often spotted together at public places partying and vacationing together.

Bethan has brief relationships in the past. She dated a couple of members from the  Geordie Shore before dating Beau. She was linked-up with Gaz Beadle from the show after they confirmed they had a crush on each other.

The TV star also dated, Jordan Davis from the show, Ibiza Weekender. The couple was in a secret relationship for years before their official split.

As a reality star, Bethan Kershaw made a decent sum from her career and undoubtedly it isn't less than the six-digit figure.