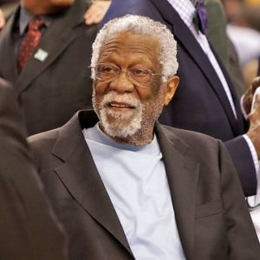 Like many people around the world, if you are also a basketball fan fanatic, then you will have surely heard about Bill Russell. This legendary player who played as the center for the Boston Celtics is a record eleven-time NBA champion and regarded as one of the greatest players in the game's history. Be it winning NBA title, NCAA Championship, Olympic Gold medal, MVP, NBA All-Stars; you name it, he has done it all. His professional and personal life both have been inspirational for many great players after him and continues to be even today.

The legendary basketball player is in matrimony with his beautiful wife, Jeannine Russell. Bill wed his sweetheart just in July 2019. 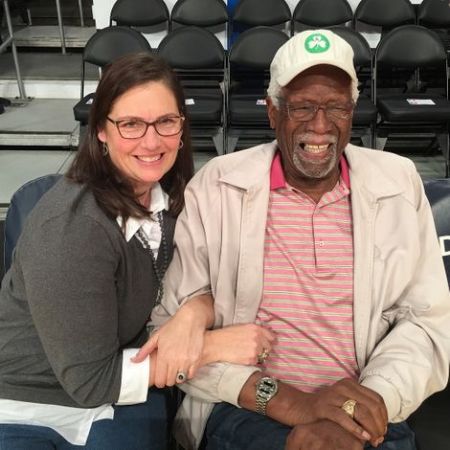 The retired athlete lives content and peaceful life with his partner in Mercer Island, Washington. He often shares pictures with his spouse on his social media.

Even though he is living quiet days with his companion, Jeannine is not the first spouse of Bill. The legendary player was hitched several times in the past.

Russell shared an adorable post to celebrate his marital anniversary with his beloved wife on Instagram. On the first anniversary, Bill and Jeannine renewed their marital vows in a private ceremony. 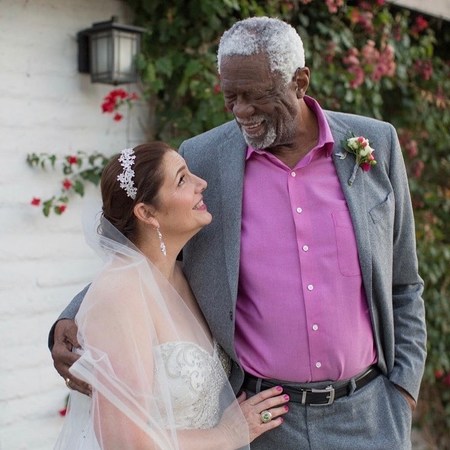 The NBA star can be seen in a pink shirt & grey brazer looking down on his wife who looks beautiful in a white dress and tiara. Jeannine can be also seen flaunting the wedding ring on her finger.

To add more sweetness, Russell captioned the post with the comment that read, "Happy 1 year vow renewal #Anniversary to my wonderful wife. We realized today we were married on the 8th, and renewed our vows on the 24th. The #Kobe connection goes deep. "

Needless to say, Jeannine is the one for Bill and vice versa. By the looks of love in their eyes, Mr. and Mrs. Russell will spent the rest of their life together with love and romance only.

Married Three Times Already in the Past

Bill first tied the knot with his college sweetheart Rose Swisher in 1956. The couple even shares three children; two sons, William Jr. Russell and Jacon Russell and a daughter Russell Karen Russel. Their daughter Karen is a television pundit and a lawyer. Russell and Swisher lived together for 17 years before calling it quits in 1973. 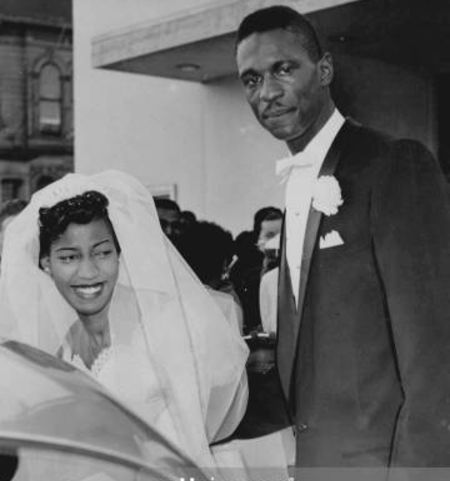 Four years later, the athlete walked down the aisle with Dorothy Anstett, who was the 1968 Miss USA. The duo's marriage was mainly surrounded by controversy mostly because his former wife was white. 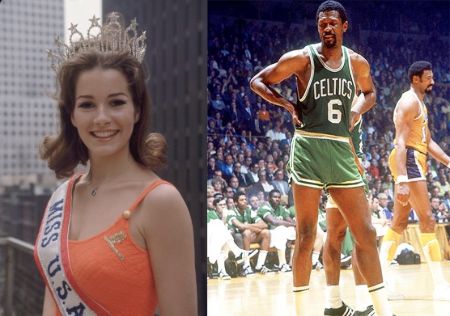 At that time, there was a wide prevalence of racial discrimination, and the legalization of interracial marriage was not yet introduced in the US. Nevertheless, the couple lived together for three years before getting a divorce in 1980.

After that, the basketball player remained single for a long time, 16 years to be exact, when he met Marylin Nault, a jewelry salesperson. The couple exchanged wedding vows on February 17, 1996. 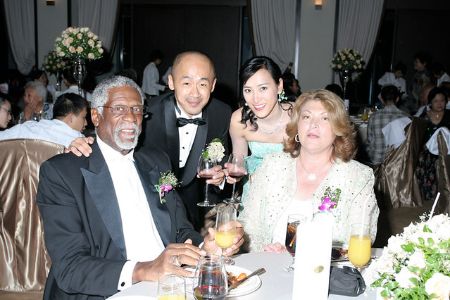 Russell's third marriage was comparatively better than his previous one as there were no major disputes, and both of them lived a peaceful and happy life until his partner's death on January 21, 2009.

44 years since he refused to be inducted into the Hall of Fame in 1975, the Boston Celtics legend finally accepted his Basketball Hall of Fame ring. 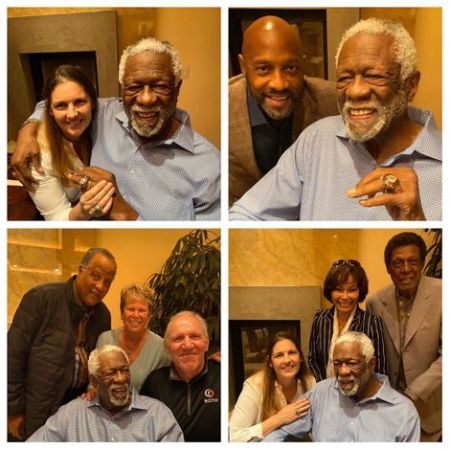 Bill shared a post along with photos on his Twitter account, which showed him being presented with his Hall of Fame ring in a private ceremony with his wife and close friends, former basketball players Bill Walton and Anne Meyers. Along with the post,

"In a private ceremony w/my wife & close friends A.Mourning @AnnMeyers @billwalton & others I accepted my #HOF ring. In ‘75 I refused being the 1st black player to go into the @Hoophall I felt others before me should have that honor. Good to see progress; ChuckCooperHOF19 @NBA"

Well, congratulations to the champ!

Bill Russell grew during that time when racial discrimination was prevalent all over the United States. The black people living in the US suffered a great deal of abuse and discrimination, and it was no different for Russell's family.

Once the 11 time NBA champion's father was once refused service at a gas station until the employees had first taken care of all the white customers first. When his father Russel tried to leave the place, one of the attendants put a shotgun in his face and threatened to kill him if he did not stay and wait for his turn.

In another incident, his mother was walking in an elegant outfit when a white policeman approached her and told her to go home and remove the dress because it was a white woman's dress. 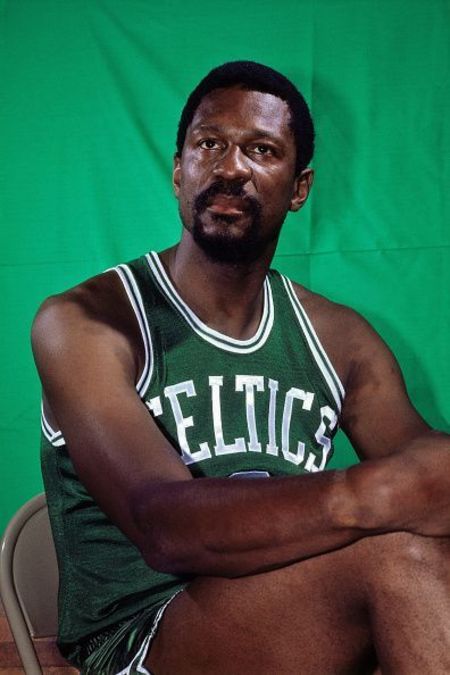 The discrimination did not stop even when the 2.06 meters tall man became a star player. In 1958 offseason, the NBA All-Stars toured the U.S., the white hotel owners in segregated North Carolina refused rooms to him and his black teammates.

It is still hard to believe that after all these years of development, advancement, and education, racial abuse and discrimination still exist in the US and other parts of the world. Everyone needs to realize that God created everyone equal, and there should be no such things as judging an individual based on skin color, ethnic, or racial background.

Net Worth and Career Earnings From Basketball

Bill holds a net worth of $10 million, as of 2019. His wealth is all thanks to his successful career as a basketball. On average, an NBA player can earn a whopping $7.7 million annually.

Check out the clip of Bill Russell playing for Boston Celtics!

Almost a decade later, Wilt Chamberlain became the first NBA player to receive a $100,000 salary in 1965, Russell demanded his Boston Celtics' coach Red Auerbach a $100,001 payroll which he received promptly.

The Basketball Hall of Famer assuredly made a big fortune from his successful career.

Aside from basketball, the talented man is also an author and has several books under his belt. He has written as a joint project with a professional writer.

Some of his books are Red and Me: My Coach, My Lifelong Friend (Price= $4.69), Russell Rules: 11 Lessons on Leadership from the 20th Century's Greatest Winner (Price= $6.49), Second Wind: The Memoirs of an Opinionated Man (Price= $8.99), Decorative Furniture Finishes With Vinegar Paint (Price= $3.99), Field Guide to the Wild Mushrooms of Pennsylvania and the Mid-Atlantic (Price= $22.48), etc.

Bill Russell is married to his wife Jeannine Russell. Bill and Jeannine walked down the aisle on July 2019.

Bill Russell was in matrimony with Marylin Nault. His late wife Marylin was a jewelry saleswoman with whom he was married for 16 years.

The legendary basketball player's second wife was Dorothy Anstett. His ex-spouse was the Miss USA of 1968 with whom he lived for three years.

Karen Russell is the only daughter of basketball legend Bill Russell and Rose Swisher.

Along with his first wife, Rose Swisher, legendary basketball player Bill Russell gave birth to three children one of them is William Jr. Russell.