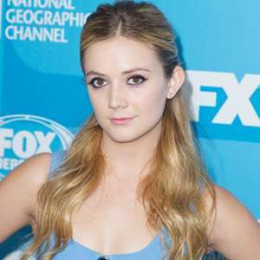 "Scream Queens" actress Billie Catherine is currently single. She is well known for her portrayal as Chanel#3 in "Scream Queens". She is the daughter of the Bryan Lourd, a talent agent and business executive, and mother Carrie Fisher, an actress. Billie graduated from New York University with a degree in religion and psychology. She began her career playing with her mother in Las Vegas.

Billie Catherine is the granddaughter of actress Debbie Reynolds and singer Eddie Fisher and the niece of Todd Fisher, Joely Fisher, and Tricia Leigh Fisher. It has been reported that she would  return to the Season 2 of "Scream Queens." Billie has also worked on Star Wars: The Force Awakens, Billionaire Boys Club, and Star Wars: Episode VIII. She has not revealed anything about her relationships.

Updated: Currently, she is dating American actor and the Twilight Saga star Taylor Lautner. The couple started their relationship since December 2016 and as of now, they are happy together.